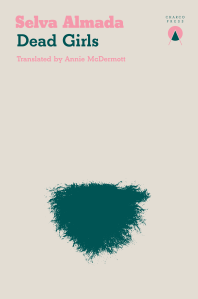 Dead Girls, by Selva Almada (translated by Annie McDermott), investigates the unresolved murders of young women in the author’s home country – Argentina. Focusing on three girls murdered in the early 1980s, it is shocking although, sadly, unsurprising.

“Being a woman meant being prey.”

The author interviewed family and friends of the deceased, adding in her own experiences of growing up in a provincial town at a time when even phones in homes were rare. With few broadcast TV channels, news was mostly local. The author found this suffocating. Nevertheless, she felt mostly safe. The society she lived in chose not to acknowledge known incidents of domestic violence. It was drummed into her that if she dressed in a certain way, spoke to strangers or stayed out late she could be raped – and it would be her fault for putting herself in that situation.

The writing style is fragmented, jumping between investigation and informed opinion on each case. Lists of other unresolved murders of women are included. Femicide is far from unusual.

“My friends and I were still alive, but we could have been Andrea, Maria Luisa or Sarita. We were just luckier.”

Almada’a personal history is interwoven with her research into the dead girls’ lives – a reimagining of their last days. She uncovers horrific tales of gangs of boys raping individual girls with impunity, and of older men paying for a young girl to have sex with. The accounts are searing and disturbing although never voyeuristic. Life is not portrayed as happy for anyone mentioned.

An interview with the brother of one of the murdered girls highlights the arrogance of men in the country. This does not lead to any sense of fulfilment – several suicides are mentioned. Certain family members chose not to meet with the author, preferring to put what happened behind them. Others agreed to a visit then appear to have rehearsed what they were willing to share.

There are elements of the narrative that I found odd – perhaps a cultural difference. The author regularly consults a psychic – as do other characters featured – and gives credence to what is said.

That aside, this is a clear-eyed and compelling account of a journalistic investigation into murders for which no one has been punished. That they are a drop in an ocean of similar cases makes for a chilling read. 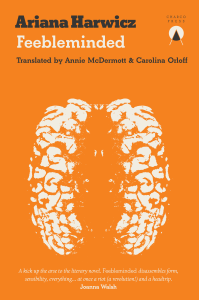 Feebleminded, by Ariana Harwicz (translated by Annie McDermott and Carolina Orloff), is a disturbing depiction of an intense mother and daughter relationship. The younger woman is around thirty years of age and consumed by the affair she is having with a married man who lives many miles away. The older woman wants to know all the details, having once been sexually decadent and adventurous herself. Told from the point of view of the daughter, the reader is offered a stream of consciousness and ongoing reactions alongside flashbacks to a childhood that was is some ways ordinary but coloured by the mother’s similar distractions and needs.

The pair live in a remote, rural home that also housed the grandmother until her death. The picture painted is of women who seek release through alcohol and men but do not sustain conventional relationships. There is both lethargy and anger, the beauty of location fogged by fluctuations in mood and introspection.

The story is written in three parts. The first dives deep into the daughter’s thoughts and agitations as she satisfies her body’s cravings between assignations. Her lover does not contact her as often as she needs. There is desperation, a feeling of suffocation in the inanities of the everyday. The mother and daughter drink together, suffer hangovers and berate the sexual choices each has made. Happy moments from their past, those that started with innocence and childish pleasure in memory, were rarely sustained. The mother rushed her adolescent daughter into a womanhood that they could share, taking delight in knowing the details of burgeoning sexual activity. Now she watches as her daughter sinks into a lassitude of frustration over a man who lives with and loves another.

The second part sees the daughter lose her job due to her preoccupation with this man. Her mother fears destitution and blames her daughter for granting too much importance and attention to the affair. The pair argue, yet there remains mutual concern.

“I’m not a fucking ATM. Mum pulls a sorrowful face and I imagine stroking it. They always find a way to get you, these women with long, straight, clean-smelling, usually honey-coloured hair. They can say the most horrendous things, behave like utter despots, but afterwards you still want to run your fingers through the strands. How much is left, how long can we survive?”

The third part of the book sees the daughter leave their home but then discover that the man will not forsake his wife as she is pregnant, despite how he had spoken of their relations. The mother and daughter plot a terrible revenge.

The writing is dark and intense yet in places, somehow, also poetic. It is shocking in its rarely voiced, searing authenticity. The imagery is violent in its beauty, grotesque in its imaginings, yet provides sunbeams in momentary descriptions. There is care and a shared lust for life amidst the discord and blame.

Described as the second part in an ‘involuntary’ trilogy that opened with the critically acclaimed Die, My Love, this book will appeal especially to those who enjoyed the former work. It is impressively potent and tightly tempestuous. A memorable if not always comfortable read.

My copy of this book was provided gratis by the publisher, Charco Press.