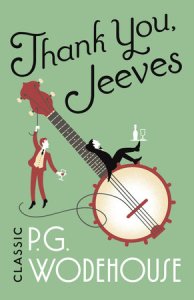 Thank You, Jeeves, by P.G. Wodehouse, is one of a series of five classic Jeeves and Wooster novels being reissued by Arrow. Wodehouse was a prolific author, much admired for the gentle humour and droll sense of the ridiculous. Having last read any of his work several decades ago I was interested to see how I would react in the changed climate of contemporary care over expression. Certain terms jarred, and rightly, but the underlying wit and warmth remains.

In this tale Bertie Wooster has taken up a musical instrument, the banjolele. The noise he makes while playing sparks complaints from his London neighbours which he first hears about from a little liked acquaintance, Sir Roderick Glossop. Unwilling to countenance the idea of abandoning his art Bertie decides to move to the country where there are fewer people to annoy. He is shocked when his gentleman’s gentleman, Jeeves, declines to accompany him, going so far as to resign when it becomes clear that Bertie will continue to make his music within the confines of a small cottage. Undeterred, Bertie pursues his plan anyway.

The cottage is rented from his old school friend, Lord Chuffnell, who resides at his stately pile nearby. On hearing that Bertie has let Jeeves go, Chuffy has snapped him up having cleared this course of action with his pride-deflated friend. Bertie discovers that Chuffy has fallen head over heels in love with an American heiress, Pauline Stoker, who unbeknown to Chuffy was once engage to Bertie. Pauline’s father put a swift end to their planned nuptials on hearing tales of Bertie’s exploits from Sir Roderick. All of these characters are now, for a variety of reasons, visiting Chuffnell Regis, and the comedy of errors may begin.

The language is over the top in its expression and inventive wit, which fits perfectly with the characters and their misadventures. Added to the mix are a pair of zealous policemen, and two young boys who could be loved only by their mothers. Bertie concocts various plans to bring his friends together, only to have them backfire. The tale includes a kidnapping on a luxury yacht, a devastating fire, and Bertie being forced to go without breakfast. Throughout it all Jeeves remains calm, offering information and advice to save the day.

This is escapist reading for those happy to immerse themselves in a privileged world without worrying about the wider implications. It is fun and easy within that freedom. In today’s censorious climate some of the humour could draw ire, although given the caustic nature of much modern comedy this is gentle. That I am afraid to laugh too loudly for fear someone will condemn me suggests I feel shackled. Wodehouse’s world may be anachronistic but his writing can be enjoyed if read in the context of its creation.

My copy of this book was provided gratis by the publisher, Arrow Books.