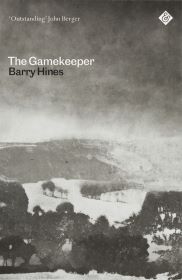 “George Purse never killed anything for fun. He only killed to protect his pheasants, which were then killed by other people for fun.”

The Gamekeeper, by Barry Hines, follows a year in the life of George Purse, one of the gamekeepers working on a country estate in Yorkshire owned by a Duke. The lineage of this landed aristocrat could be traced back to William the Conqueror. The Yorkshire manor, moors and woodland in which this story is set make up his small estate, his larger one being located in Wiltshire. The place is meticulously maintained according to his wishes that he may enjoy part of the shooting season there with invited guests. He visits for only a few weeks each year.

George lives with his wife and two young sons in a cottage that comes with the job. It is set by the woodland in which he must work raising pheasants and protecting them from predators. He has been in this role for a decade having previously worked at the local steel plant. It is a hard life but still better than the alternatives.

“George Purse had always enjoyed being outside. When he left school there had been two choices. It was either the steel industry or the pit. Some lads chose the pit. George Purse chose steel … two more years of working shifts, of lifting boxes, of strained backs, of fierce heat, of metal burns. He took the gamekeeper’s job at half his previous pay.”

George is a conscientious keeper, carrying out tasks because that is what he is paid to do. This does not always make him popular locally. Hungry men become poachers but must still be deterred. The Duke’s land is not open access so children are to be scared away. George sets traps to kill the many wild creatures that would take the birds he raises. He shoots or poisons both land and avian predators. From time to time he can barter a favour from local residents with his catches. His family find the life they must lead lonely due to his job.

There are evocative descriptions of nature through the changing seasons but these are shadowed by the violent deaths meted out by a man in the service of a wealthy landowner. Over the course of the year George will provide for and protect the pheasants – from eggs to chicks to poults until finally they are shoot worthy. He battles disease and inclement weather to minimise losses he would be judged harshly for.

“Ascot week … It rained every day at the races. The thunder rolled, and the rain came down like rods. It rained every day in most places. Crops were flattened all over the country, and a river overflowed in the south-west. But it was the weather at a race meeting which made the headlines.”

Although a story that shines light on the work of a gamekeeper – and this is both informative and fascinating in the way it is told – at its heart is the unbridgeable divide between rich and poor. George recognises the absurdity of his hard work, how he labours day and night to keep pheasants alive that they may be shot from the skies by his employer. It is a job and he gets on with it, mostly stoically.

What he does complain of from time to time is when the wealthy claim they cannot afford to raise the standard of living for their employees. Wages remain depressed. Dwellings are maintained only minimally. He deplores that when they meet, the workers must kowtow to the landowners and their ilk.

“Some estates had contracts with exclusive London restaurants to provide a few brace for the evening of the 12th … some restaurants used to charter light aeroplanes in which to carry the birds from the moors … The cost was passed on to the customers, and they could afford to pay for it anyway.
And during the same period there was the General Strike, when miners stayed out for six months and were eventually starved back to work, and the Depression, with millions of people unemployed throughout the country.”

The author employs a neutrally descriptive tone in the narrative, yet still it overflows with the beauty of the natural world – and how it is thoughtlessly damaged by men who regard it as their personal and rightful playground. The grouse shoot and then pheasant shoot chronicled raise the important issue of why on earth such ‘sport’ is still allowed to happen. It made me angry this is accepted – and despairing that so little ever changes.

A powerfully understated account of a working man’s choices and the costs he must then pay – a story that resonates and will linger. This is country life stripped of its bucolic veneer.

My copy of this book was provided gratis by the publisher, And Other Stories.