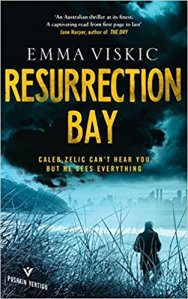 Resurrection Bay, by Emma Viskic, is the first in a proposed series of crime thrillers featuring Caleb Zelic. Set in and around Melbourne, Australia, it opens with the brutal murder of the protagonist’s friend, Gary, who the police then insist must have been involved in some dodgy dealings. Caleb has known Gary since they were children and refuses to believe this can be true. He sets out to find the culprits, and their motive, for himself.

In a packed genre the author has succeeded in creating an original lead character. Caleb is deaf but determined to prove that he can cope independently in a hearing world. His reluctance to accept help, or admit when he is struggling, has cost him his marriage. Now he finds that his continuing love for his ex-wife, Kat, can be used against him.

Kat is a talented artist of Koori descent. They grew up a few streets apart in Resurrection Bay. In this small community, where everyone takes an interest in each other’s business, it can be hard to keep secrets. With the death count rising Caleb starts to question his innate ability to read body language. He is unsure who he can trust, including his brother, Anton, a recovering drug addict.

Together with his business partner, Frankie, Caleb attempts to work under the far-reaching police radar to uncover what Gary had been working on and if, as he suspects, this led to his death. Gary had made a series of frantic phone calls, including to Anton and Frankie, so knew his life was in danger. Caleb comes to realise that whoever took his friend’s life may wish him to meet a similar end.

The denouement is bloody with an excellent twist. There were perhaps a few too many threads thrown out before it all came together but this did keep me guessing. The pacing was balanced whilst maintaining the tension. The writing flowed effortlessly which always takes skill.

Enjoyable and compelling with sufficient originality to keep this popular style of storytelling fresh. A recommended read for all crime thrillers fans.