I have been neglecting my blog recently. This is why.

My mother-in-law died last week. Cancer, so not unexpected, still distressing. She was much loved and will be missed by family and friends. She is the first of my children’s grandparents to pass away.

She and her three brothers were raised by their single mother after her father was killed in the war when she was very young. She suffered ill health as a child resulting in mobility issues throughout her life. This did not stop her enjoying tea dances and the pleasures of travel. She was curious within her known parameters, sociable. She liked to go out and about.

She was still a teenager when she married. Their two children arrived within sixteen months of each other, a boy and then a girl. She chose to return to paid work, sharing childcare with her husband who worked shifts. She felt it important that a woman retain a degree of financial independence, an escape fund, and berated me when I entrusted all my worldy wealth to her son.

On retirement they moved house to be close to where we live. This was soon after my second child was born. I believe she would have helped more with our children had I asked. I was hugely protective of my cubs.

Throughout their lives she and her husband worked and saved and invested their money. She told me many times that she intended to enjoy what they had earned. They would eat out, meet up with family and friends, make regular trips to shops. It was a remove from the thrift in which I was raised.

My in-laws owned a touring caravan when I first knew them. They sold this to buy a static expecting us to use it as well. We did once, but it was not for me. So many of the activities she enjoyed were not for me. I believe she struggled to comprehend what I was.

They went on cruises, city tours and short breaks to comfortable hotels. After retirement they enjoyed lengthy trips to the antipodes, suggesting once that we may wish to relocate. She urged us to travel more, perhaps forgetting the challenges children present. We were happy enough as we were.

Everywhere they went they would make friends, actively keeping in touch when they returned home. On the occasions we were introduced, these friends appeared very much like them.

My mother-in-law was a skilled cook. She and her husband regularly entertained. My children appreciated the dishes she prepared, especially given my inability to produce anything so tasty.

Her enthusiasm for her hobbies – flower arranging and then quilting – took her into the heart of the local community. She helped to run clubs, organise events. She believed it was important to have a hobby and poured time and resources into improving her skills. She took classes; bought magazines, tools and materials; shared tips with fellow enthusiasts. I was presented with many beautiful flowers over the years. She made each family member a personalised quilt. The end results of her talent and creativity were impressive.

From time to time she would invite me, and then my daughter, to local craft events but we had no desire to become involved. She did not invite my husband or sons.

My memories of my mother-in-law are not entirely positive and this saddens me. We viewed life differently, in outlook and priorities. I sometimes felt she was trying to make me more like her. I do not know how she felt about me.

Her bar seemed so high. I did not have my children potty trained at eighteen months as she had managed. I did not seek her advise on childcare despite how well she considered she had raised her own children. She told me that mine were spoiled, an accusation they deny. She did take pride in their achievements.

My husband bore the brunt of our differences. He juggles the demands of the ladies in his life as best he can.

The last few years of his mother’s life were dogged by various health issues yet she remained stoic. It has been difficult for her husband and children to watch her decline. Whatever our personal frictions, she was mother to my husband, grandmother to my children. Her memory will live on in them. 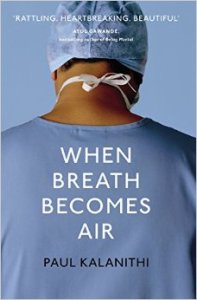 When Breath Becomes Air, by Paul Kalanithi, is a memoir put together from an unfinished manuscript left on the author’s computer after his death from cancer. The book opens with a forward by Abraham Verghese and contains two parts written by Paul and then an epilogue by his wife, which brings closure to a story that he did not have time to complete. It is incredibly moving but so much more. It is a profound exploration of what it means to live.

“even if I’m dying, until I actually die, I am still living.”

Paul’s prose is coruscating, devastating, illuminating. The words reach down deep. I felt a sense of loss, of tears, of a desire to grab this life and appreciate everything in it.

Paul was obviously born to privilege. He first studied as an English major, completing a Masters in Literature before changing direction and preparing for medical training, first at Cambridge and then at Stanford where he rose to become Chief Resident with a glittering career promised, just ahead. He was always questioning his choices and seeking wisdom.

“I don’t believe in the wisdom of children, nor in the wisdom of the old. There is a moment, a cusp, when the sum of gathered experience is worn down by the details of living. We are never so wise as when we live in this moment.”

The sections relating to the author’s residency should be required reading for all with contacts to the medical profession, including patients. He ponders what it means to be a doctor, how it is so much more than saving a life. He offers thoughts on those occasions when this may not be in the patient’s best interests, how illness afflicts not just the individual but also family and friends. Few survive major trauma unchanged.

The second part of the book relates to his months after diagnosis, a time when he had expected to graduate and realise the dreams he had been working so hard and for so long to achieve.

“I knew I was going to die – but I’d known that before. My state of knowledge was the same, but my ability to make lunch plans had been shot to hell.”

I found this section acutely moving. Paul had such potential yet he did not indulge in asking “why me?” Instead he accepted, “why not me?” He had support from his family, he made plans with his wife to have a child, he wrote this book.

“Death may be a one-time event, but living with terminal illness is a process.”

Paul struggled at times to hand over his care to others. He learned how difficult some of the treatments he had routinely recommended were to bear. When improvements occurred he questioned how he wanted to spend his time, if his career was as important as it had seemed. His musings on why he had become a doctor should be read by all who complain about those entrusted with their medical care.

The epilogue is written by his wife and is in a very different style. Rather than considering the bigger questions of life and death and how to deal with these, she rounds off Paul’s story with facts wrapped around love and grief.

A beautiful, emotive book that is more than just a memoir. The author is a thoughful and skilled writer making this an inspiring, considerate read. Any death brings sadness to loved ones. It is hard not to think of the death of this man, whose work could have led to the saving of so many other’s lives, as a loss to the world. I am grateful that he left us these words.

My copy of this book was provided gratis by the publisher, The Bodley Head.