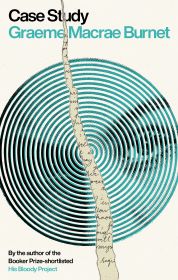 “This was what people did. They sat in pubs drinking beer and gin and listening to each other talk. They pretended to be interested and then took their own turn at talking. It was difficult to see the point of any of it.”

If you enjoyed Graeme Macrae Burnet’s Booker Prize shortlisted novel, His Bloody Project, then you are going to love Case Study. Set in the 1960s it explores what Shakespeare expressed so well:

“All the world’s a stage,
And all the men and women merely players“

In the preface, the author explains that the tale he is about to tell came about when he was offered a series of notebooks written by a young woman whose supposedly successful sister, Veronica, died of suicide. The woman blames a notorious psychotherapist her sister had been seeing, without the family’s knowledge, for Veronica’s unexpected action and sets out to gather evidence. The author had written about this man, Collins Braithwaite, in a blog post and the current owner of the notebooks believed they would be of interest.

The story is then structured as a variety of entries written in appropriate literary styles and compositions. The contents of the notebooks are reproduced along with key pages from books written by Braithwaite. There are also chapters that tell the man’s life story.

The young woman starts her quest by making an appointment with Braithwaite under an assumed name, Rebecca Smyth. She does not wish to reveal that she is Veronica’s sister. Having little knowledge of mental health issues, she assumes that Braithwaite’s clients must be ‘nuts’. This assumption injects humour into the narrative as she gives herself leave to behave in ways her carefully controlled and repressed normal self would never countenance. As Rebecca, she will flirt with a handsome admirer and become inebriated. She also finds herself talking freely to Braithwaite about her past, something that surprises her and makes her think this is why people pay a therapist for their time. Braithwaite states of her:

Braithwaite was a contemporary of R. D. Laing and railed against how the mentally ill were being treated at the time – drugged and electrocuted more than listened to. Despite agreeing on many issues, the two men were not interested in collaboration. Each thought their own work deserved the greater recognition, along with the wider respect this would garner.

Braithwaite gained fame through notoriety. He took on clients to earn money and provide cases he could write about in his books. Veronica appears in one of these under the name Dorothy. When her sister reads the account given of Dorothy’s relationship with her family she dismisses it. This was not the Veronica she had known and often derided. She could not accept that her sister may have differed from her assumptions.

As the story progresses, Rebecca Smyth and Collins Braithwaite emerge as fully formed characters, their thoughts and behaviours being at least as ‘nuts’ as those imagined people Rebecca initially tried to emulate. Perhaps if one looks closely enough at the life decisions made by any supposedly sane person, societal behaviours and constraints make little sense in terms of seeking contentment.

The author writes with skill and verve from the points of view of both men and women. There is only the one jarring inclusion. The narrator in the notebooks writes of her time at a girls’ school where sex was discussed but remained mysterious:

“At St Paul’s there was frequently exciting talk about The Penis, this chiefly concerned its dimensions”

Personally, I have never known any girls or women discuss the size of a man’s penis, although plenty of males have expressed interest in the subject. In the author’s favour, he avoids bizarre mentions of women’s breasts in descriptions of sexual encounters.

There are cringeworthy moments when Rebecca is out drinking with her admirer, Tom. These add flavour to her acknowledged difficulty in making conversation. Mostly the story builds on the emotional repression those at the time lived under, and how some strained and suffered at the behavioural shackles placed on them. Braithwaite may have pushed at the boundaries but even he could not fully escape what had shaped him as a youngster.

The young woman lives with her widowed father and has no particular wish to change this situation. She foresees for herself a future looking after him. When he encourages her to find a job, he then takes on a housekeeper his daughter soon grows jealous of. It is only when she invents Rebecca that she starts to question how she would choose to behave if freed from the constraints ingrained by her late mother.

There is much name dropping as real people coexist alongside those invented by the author. Rebecca relates many tall tales of encounters with the famous that Tom laps up. This adds to the sense that the young woman behind this mask is not as content with her lot as she has convinced herself.

The various strands come together effectively, leaving the reader questioning the fictions we create about ourselves and others. Even within close families people are unlikely to be understood, thereby building resentment, often unacknowledged. Social interactions are indeed a performance. Personas evolve but always around the foundation of upbringing.

A wise and witty portrayal of attitudes towards non conformists – how they appal but are also envied. This is impressively addictive storytelling, with breadth and depth, that I thoroughly enjoyed reading.

My copy of this book was provided gratis by the publisher, Saraband.