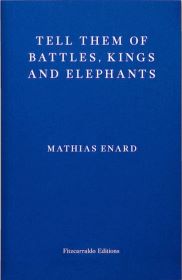 Mathias Enard’s Compass won numerous awards and garnered rave reviews from the great and the good of the literati following its release. Whilst recognising the quality of the writing, I found reading the story akin to hard work – ‘A book about an insomniac that offers a cure for insomnia’. It was therefore with some trepidation that I picked up Tell Them of Battles, Kings and Elephants. I did so because of recommendations from fellow bloggers – discerning readers but without the literary baggage carried by certain professional critics. I am glad I did not turn away from the author due to my reaction to just one of his works.

The protagonist of this story is a young Michelangelo. He has completed his apprenticeship in Florence, funded by the Medici’s. He has created his famous statue, David. The tale opens with him fleeing Rome – and a Papal commission for which he has not received the promised payment – for Florence, from where he travels to Constantinople. The Sultan there has offered a huge sum of money for the design and planning of a bridge to span Istanbul’s harbour. The Great Turk has already rejected the drawings submitted by Leonardo da Vinci.

“You will surpass him in glory if you accept, for you will succeed where he has failed, and you will give the world a monument without equal”

Based on historical fragments – what is known about true events – the author creates a tableau of the Ottoman Empire in the early sixteenth century, complete with sights, sounds, smells and cultural attitudes. Due to his esteemed reputation and commission, Michelangelo moves within the upper echelons of the city. He comes across as a somewhat temperamental aesthete, albeit one who eschews many offered pleasures.

Structured in short but richly evocative sections, the reader travels through Constantinople on strolls the artist takes alongside those tasked with looking after his needs. He befriends a poet and is drawn to a beautiful singer / dancer. He struggles to picture the bridge he knows he must help create.

Although this latter issue is drawn out in the telling, what fills the pages is a picture of an elite with sensuous appreciation of the arts but one that still harbours deeper, more bestial dangers. The powerful wield their systems of reward and punishment with ruthless vigour. Michelangelo is favoured but, as an infidel, is a magnet for his patron’s enemies.

“Here too there are conspiracies and palace intrigue; jealousies, plotters ready to do anything to discredit Ali Pasha in the Bayezid’s eyes”

A beautifully written account of a time and place that remains concise without sacrificing detail. A skilful imagining of a defining period in Michelangelo’s life that is as much about Constantinople as it is about the artist.

Tell Them of Battles, Kings and Elephants is published by Fitzcarraldo Editions.