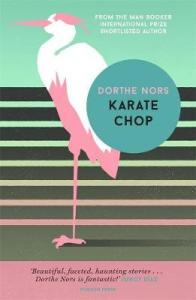 Karate Chop, by Dorthe Nors (translated by Martin Aitken), is a collection of fifteen stories exploring ordinary people and situations they encounter, with incisive wit and perception. The Danish author has been shortlisted for the Man Booker International Prize. This is a rebound edition of a selection of their shorter works.

The snapshots of life offered up are varied, as are the protagonists. All are recognisable and relateable. There is a cogency, a poignancy to the prose. An undercurrent of isolation and the frailty of human interactions pervades.

The Buddhist tells of a man whose job requires him to write speeches for a government minister. When his wife leaves him he decides that he will turn to Buddhism, thereby gaining insight from the pain. He no longer wishes to spread lies so writes an article for a national newspaper exposing the deceits in which he has been complicit. He harbours delusions of grandeur believing his actions, inspired by Buddhist teachings, could change the world. As time passes he becomes increasingly selective in following his ideals. The circle turns.

The Winter Garden is narrated by a young boy caught between divorcing parents. Wanting to please, he lives first with his mother then his father, feeling distanced when they introduce new partners who have their own children. The special regard he felt for each parent is stripped away when he realises he is not uniquely valued. Opinions, once sought, lose their impact.

The Big Tomato offers a story of hope amongst displaced people. This is a gentle tale of burgeoning friendships and appreciation of kindnesses shared.

Duckling is narrated by a young girl facing the hypocrisy of her caring but opinionated father.

“Dad had his boxes and he put things away in them, even things that contradicted each other.”

The smooth surface of family life relies on much being left unsaid.

Female Killers shares the private thoughts of a husband when alone late at night, his wife in bed. The reader may decide if, as no action results, his musings are harmless or grotesque.

Flight is a tale of loss told by a wife whose husband has left her. In trying to deny the hurt she feels, an emptiness is created. Moving on from a situation when change was not desired proves challenging.

The Heron is set in a park and offers glimpses of those passing through. Of note are approaching mothers pushing their baby carriages with intent.

“They always come in flocks, great flocks of mothers, and they stir up bad feelings in one another.”

The storyteller suspects that the stony mothers regard him as they would a sickly heron he has observed – tired and sallow, often in the way. He thinks of showing kindness to their babies but recognises the impossibility of such behaviour given the mothers’ demeanour.

She Frequented Cemeteries tells of a love story that is insular, perhaps unrequited. The protagonist is nevertheless contented but has no wish to share her new formed feelings with friends. She suspects they may demand that she regard her valued happiness differently. As in so many areas, the unusual is treated with suspicion.

These stories are concise, just a few pages each in length. They offer circumstances and concepts that the reader may then interpret. There is much to ponder in the difficulties being faced. An empathetic, rewarding little read.