“His throat became swollen hearing her take his side. No one had ever done that. Not even he had done that.”

Panenka is Rónán Hession’s second published novel. His first, Leonard and Hungry Paul, has acquired legions of fans eager to press it into the palms of every reader. Hession, a recognised musician before he took to writing, tweeted yesterday, on publication day, ‘Always a bit of Second Album Syndrome at the back of the mind, so it’s nice when people accept the book as it is.’ Let us consider then his latest book as the stand alone work it is.

Before the story begins we are provided with a definition of the title.

“Panenka: In football, a penalty technique in which the taker chips the ball artfully into the centre of the goal, counting on the likelihood that the goalkeeper will have dived to either side.”

The protagonist of the tale, Joseph, is burdened with this word as his nickname. It is even how his daughter, Marie-Thérèse, refers to him in the town where they have always lived. As we discover, there is a deep and abiding sadness to how it was acquired.

Now middle-aged, Joseph suffers debilitating, nightly pain that he refers to as his iron mask. When the medical profession investigate, the diagnosis makes Joseph reassess the bargains he has made with himself over how he lives his life. He does not share his worries with Marie-Thérèse, who moved in with him along with her seven year old son, Arthur, when she left her husband. Joseph believes she shoulders more than enough concerns already and wishes to spare her. This shutting himself away emotionally from those who care for him is an ingrained habit, one that cost him his marriage.

Joseph was a professional footballer, playing for his local team. Football fans may find this backstory of interest. What it offered this reader was a glimpse into a world where winning a game becomes everything. When any aspect of life takes on such all encompassing importance it can be hard to recognise the value of what is pushed to the margins.

Marie-Thérèse’s husband, Vincent, runs a café/bar at which Joseph is a regular. Conversations here amongst his fellow drinkers provide a picture of life in the town where they all reside. The ordinary lives depicted are shadowed by individual, small tragedies. It is a reminder that we can rarely fully know even those we interact with frequently.

This knowing a person is explored with the author’s trademark insight and wit when Joseph, requiring a haircut, is forced to try a new establishment as his usual barber is unavailable.

“Donnie had learned to cut hair in the army and viewed barbering as something akin to getting your toenails cut or brushing your teeth. It was a maintenance job, and not something to develop ideas about.”

The new barbershop Joseph chooses is run by Esther, a women he is drawn to, perhaps by the aura of sadness she too carries. Esther turns out to be wise in ways few master. Having been let down badly by someone she believed she knew well, she is circumspect when it comes to accepting what others share of themselves.

“I could have asked for the full tour – you could have shown me around all your own facts and circumstances, given me the tourist board version of yourself. A whole story that I would later have to revise or unlearn based on who you turned out to be.”

Joseph has an endearing relationship with young Arthur, a contrast to that which he offered Marie-Thérèse when she was a child. Whatever sadness it brings Esther, she is gentle with his eagerness to tell her of the boy.

“‘That’s old – one of his baby pictures’, he said.
‘Ah yes, he was still landscape then,’ she said. ‘He’s probably portrait now.'”

When guilt is hollowing a person, gnawing away from the inside, what do they hear or remember other than the blame that affirms worst fears? Joseph believes he has let everyone who ever cared for him down. He struggles to accept when love is offered, caught up as he is in trying to process the pain of perceived failure. That he has been given another chance with his grown daughter, grandson and then Esther makes him anxious not to repeat the mistakes of his past. Changing habits is never easy.

The shadows cast over the characters by loss – historic and impending – could have made this a dark read but the author is adept at evoking the resilience and hope that even the simplest acts of kindness bring. This is a story of people and relationships, of finding sincere words that the damaged can hear. A poignant and thoughtful tale that lingers beyond the final page.

My copy of this book was provided gratis by the publisher, Bluemoose. 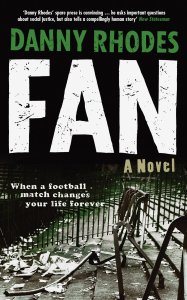 Fan, by Danny Rhodes, is a fascinating social commentary about changing times. Two stories about the same protagonist unfold side by side, one covering his teenage years in working class Nottingham, the other set fifteen years later when he travels from the new life he has carved out for himself down south to confront his demons in the home town he escaped from.

The writing style is raw and sparse but the tale is utterly compelling. There is a great deal of football in the story, but it is the football of the 1980’s when ticket prices were low, grounds were run down and the passion of the fans was pivotal to the lives they led. This was the era of hooliganism and disasters waiting to happen, culminating in the Hillsborough tragedy of April 1989, which the author of the book experienced first hand.

Despite the book pinning its events around a timeline of football matches, it is not a story that requires an interest in the beautiful game. This book is about characters and attitudes, about a bygone era and how the teenagers who lived their lives from Saturday to Saturday coped, or failed to cope, with the changes to the game and to their lives as they aged.

The author manages to give reasons for the violence, to gain sympathy for men who would appear from the outside to be emotionally weak, to have brought their misfortunes on themselves through foolish behaviour, apathy or shallowness of expectation. He harks back with regret to a time that most would be glad to have moved on from, but succeeds in explaining why it seemed good.

There is no redemption or closure, but real life is not a series of neatly parcelled, self-contained episodes. We are made what we are by our experiences and how we deal with them. This is a book that looks at events that affected a nation, and explores their impact on individuals. It is brutal in places, yet compelling and thought provoking. The author succeeds in drawing the reader into his imperfect world and making them care.

My copy of Fan was sent to me by Sophie of Reviewed The Book. I am grateful to her for providing me with a thoroughly good read that I would have no hesitation in recommending to others.