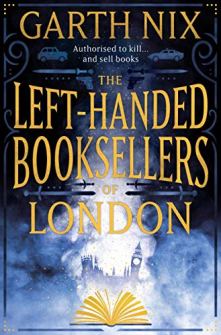 ‘The Left-Handed Booksellers of London’ is a fun, light-hearted YA fantasy adventure perfect for anyone looking for easy entertainment. There’s little depth to the story or characters, but the plot is fast-paced and entertaining. With the current trend in fantasy for dark, gritty stories, it’s nice to see a more cheerful take on the genre.

The story follows Susan, a just-turned-eighteen-year-old from just outside Bath who’s moving to London to start an art course. She’s also hoping to use the opportunity to finally track down her dad – a subject her mum will never talk about. However, when Susan arrives in London and goes to meet one of her mum’s acquaintances, she finds herself being rescued by a mysterious maybe-wizard named Merlin – and from there, her time in London starts to go in a very different direction than she’d planned.

Susan is a likeable enough protagonist – very much a reluctant heroine who spends the majority of the book very confused. None of the characters are ever developed in depth, but Sarah serves her narrative purpose well. Merlin and Vivian are far more interesting characters, but while details are tossed out here and there neither is fully explored. I’d happily read an entire follow-up novel about Vivian and her life when Merlin isn’t dragging her around the country because everyone’s trying to kill his latest crush.

The concept of left and right-handed booksellers and their magic system is brilliant – quite unique, and who in the reading world doesn’t want the bookseller to be the hero of the story? Again, the pace means this isn’t explored, but it’s a great take on the secret-protectors-of-normal-people-from-secret-magic trope. The rest of the worldbuilding borrows heavily from general European mythology and folklore: Fenris from Norse mythology, a variation on vampires, goblins, the power of May Day. It’s a crude mash-up but works well, blending familiar elements into something new.

The plot is the main focus. I haven’t read any Garth Nix for years – I believe I once read Sabriel, but so long ago I can barely recall it – but if all his books are in this vein, I can see why he’s so popular with younger teenage readers. The plot is conventional, with relatively predictable twists and turns, but entertaining, with witty dialogue and a teenagers-uncover-adult-incompetence slant so popular with younger readers. There are sad and tense moments, but for the most part it’s upbeat and humorous. Given that the main character is eighteen, I’m not sure if the aim was to have an older target audience, but the light tone and superficiality make it read like a younger book.

Overall, this is a fun YA fantasy adventure great for light entertainment. Recommended as a holiday read or when you need a light pick-me-up – or for a more reluctant teenage reader.