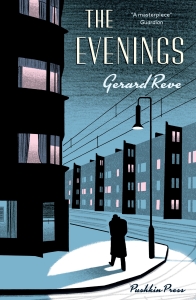 The Evenings, by Gerard Reve (translated by Sam Garrett), is a book about one man’s ennui. Set in post war Amsterdam, its protagonist is twenty-three year old Frits van Egters, an office worker still living with his parents. The story follows his day to day existence over the course of a few weeks in December. His actions, mostly banal, are presented in hour by hour detail. There are repeated references to the clock as he watches time slowly pass, frustrated by his lack of fulfilment.

Frits leads an ordinary life in every sense. He cycles to and from work, prepares food or eats with his parents. He calls in on friends, visits the cinema, seeks company then counts the minutes until he can leave.

Frits is not a pleasant character, although this view is exacerbated by the detail of his private thoughts which few would ever share. He treats his parents with contempt, insults his friends with impunity. Uncomfortable with silence when with others, his conversation is often offensive.

Amongst his friends there is cruelty, in word and deed. A dog is tortured, the young men exchange anecdotes about the deaths of children, they imagine how they would choose to kill. As a young boy, Fritz dismembered insects and took fish out of water just to see how they would cope, how long they would live. He states that women are ‘defective, deplorable creatures’. He advocates the culling of all those over sixty.

Much of what he says is taken as humour by his friends who, despite knowing he failed at school, consider him a thinker. Fritz has a relentless preoccupation with baldness coming up with many wild theories for its cause and prevention.

In the privacy of his home Fritz will examine himself in front of mirrors. Despite deploring his parents’ slurps and unhygienic practices, he too has distasteful personal habits. He sleeps long hours when he has the opportunity and suffers vivid, violent dreams.

I found the telling repetitive, a book about boredom that I wanted to end. In the Absence of Absalon, by Simon Okotie, proved that the meticulous detail of a life can be portrayed with humour. Unlike that perspicacious tale, I found this soulless.

Other reviewers have described this book as funny and it is not the first time I have failed to see the vaunted humour in a portrayal. The voice and structure cannot be faulted, the setting and imagery impress, but this was not a book I enjoyed reading.