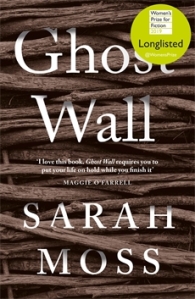 “The baskets weren’t to sell. Louise was a friend of the Prof, a semi-retired lecturer in textile arts who now spent her days making things by hand, the hard way, for the amusement of people bored by safe drinking water, modern medicine and dry feet.”

Ghost Wall, by Sarah Moss, is set in the Northumberland Moors where archaeology students have built an Iron Age hut. As part of their course they must spend a period of time living as the Ancient Britons did, hunting and foraging for food. Joining them is their course professor and his friend, Bill, who is a hobby expert on Iron Age living and survival. Bill has brought along his wife, Alison, and their teenage daughter, Sylvie. It is through Sylvie’s eyes that the story is told.

The students – Molly, Dan and Pete – sleep in modern tents close to the camp. The family sleep in the dark hut. Uncomfortable though this is, Sylvie is used to complying with her father’s requests and holidaying in wild places. Bill is an angry, volatile man who demands submission from his family and punishes transgressions.

“I do not know what my father thought I might want to do in those days but he devoted considerable attention to making sure I couldn’t do it.”

Sylvie is fascinated by the students, especially Molly, as they talk of travel abroad and the freedoms they enjoy. She has been raised to use her time wisely. Her dad eschews modern pleasures and expects his family to do the same. The world he inhabits is one of resentment that the land he considers rightfully his is now populated by foreigners. In his eyes, these people have taken from him the respected position in society he could have had before they arrived. He reveres what he imagines were the hierarchies of the Ancient Britons, when women cooked and cared for offspring while the men hunted, guarded and killed.

The book opens with a depiction of an Iron Age ritual during which a young woman is sacrificed for the supposed good of her people. This is based on what has been surmised by historians from the state of a body found preserved in nearby peat bogs. Bill has explained to Sylvie that the Ancient Britons would place in the bogs possessions they valued, believing that giving these to the land would ward off evil and help them to survive.

Molly is scornful of Bill’s attitudes but his expertise soon draws the men in the group to take an interest in certain Iron Age activities. The group divides along gender lines with the inevitable shift in dynamics.

The writing is subtle in its power and darkness. The nuances of each theme explored are developed with restraint yet depth. Sylvie’s impotence as a child, her lack of agency and learned silence, is both searing and sapient. An intoxicating read that, especially considering its brevity, packs impressive literary heft.

Ghost Wall is published by Granta and is available to buy now.

My copy of this book was borrowed from my local library.