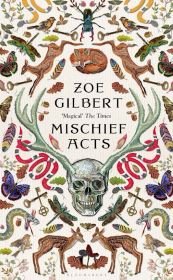 This review was written for and originally published by Bookmunch.

Mischief Acts takes the reader on a whirlwind romp through the history of everyday life in England. It weaves true events, often violent, both natural and man-made, with the mythical creatures that may have caused them. Set in the Great North Wood, a sprawling ancient landscape that gradually became fragmented by the development of south London’s suburbs, the story opens in 1392. King Richard is out hunting, his party led by Herne, a favourite. In an act of self-sacrifice Herne steps between the king and an attacking stag. Although mortally wounded, Herne is brought back to life by Bearman (regarded as a sorcerer) but at a terrible cost. Herne will continue to haunt the woods in various incarnations, with his saviour and nemeses always close by.

The chapters are mostly set a century or so apart. We see how the Great North Wood was used and how this changed with the times. There are: charcoal burners, landowners, inn keepers. Living alongside the wild creatures are: hermits, goddesses, beautiful women drawn from their modest upbringing to commune with the elusive and enchanting. Local residents forage for food, for themselves and their livestock. There are those who understand that the ancient network holds secrets, having observed everything that has played out in these environs across time.

“The straight lines of society’s rules cannot extend into the wood. They are left at the road, and something else takes precedence in the mind at the sight, and scent, of trees.”

I very much enjoyed the writing style and how it subtly altered as the way life was lived by man changed as the centuries passed. In the 1691 chapter, colliers gather in a tavern to discuss the rumour of a highwayman who dresses like a woman – an unimaginable concept and one that disturbs more than any known law breaking.

“As the heath absorbed the last film of light, as dew into a rug, on that Monday evening in October, and the colliers asked for more ale so that their throats were now thoroughly wetted, they began to talk. Always their conversation creaked before finding its runners, for days and nights alone in the wood can rust a man’s words, but find a track they did”

In later centuries, the Enclosures Act carves up the wood for the wealthy, with trees felled and non-conforming residents evicted. Wildness is to be tamed and money made however foolish this may again prove to be. At a time when landowners desired manicured lawns and managed landscapes – the outdoors an extension of their vast country houses – natural woodland was merely another resource to be plundered.

Men of science are shown to be revered as forward thinkers, harbingers of progress who understand the benefits to their own standing.

Moving on, the 1936 chapter focuses on the fire that destroyed the redevelopment of the Crystal Palace. Herne the Hunter, in this incarnation, woos the daughter of the man whose life’s work is the restoration of this supposed wonder of the modern world. The daughter expects to impress Herne when she shows him around – and is perturbed by his reaction.

“You won’t have seen anything like it,’ I said. ‘Inside is like an endless garden, like a paradise. You can see anything, learn anything.
‘You don’t remember what was here before,’ the man said […]
‘Spectacle! Glamour! Obedient magic! Come to the Crystal Palace, and be enchanted. For what could be more enthralling than things that men have made.’”

Mischief makers are and have always been villains to some and heroes to many. There are those who believe it is worth sacrificing freedom for a conformity that is sold as offering wider benefit – to privileged mankind at least, who considers little else. The latter sections of the book move into the future to vividly portray the path this attitude takes.

“Progress is a slippery concept … It’s all about context”

The author plays with a plethora of myths and legends as she moves through time and the key events that serve as anchors in the myriad stories told here. Nature is appreciated by few of the characters, except when it has been controlled and prettified. Wildness – the unknown – is feared. The results of the dominance of one species and the destruction they wreak are shown to be deadly serious.

The denouement is a clever turning of the circle, with Herne and Bearman coming together in an imaginative and almost hopeful scene. Although much has changed, the elemental heart of the wood remains, waiting to reawaken.

Chapters are preceded by poems – folk lyrics – some of which I recognised, in cadence if not the words. There are also charms that weave through the story that follows – magic to be found in nature. All of this adds to the air of mystery. Not everything in life needs provable explanation.

Maps are included that show how the Great North Wood lives now mostly in street names.

Despite the obvious destruction of a wild place filled with lore as well as life, this remains an exuberant take on man’s conceits – his reaction to what he cannot explain and whose existence he will therefore deny credence. The stories offer a reminder that natural woodlands are much more than the trees. Man’s foolish belief in his omnipotence is what is fanciful – how quickly he forgets the storms and other phenomena that rip through the houses of cards he mindlessly, endlessly builds.

Any Cop?: A tale for our times, a call to learn from history. An evocative and highly entertaining read.