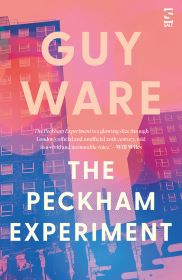 “What had she imagined we would write, out there amidst the pigs and the peasants?”

The Peckham Experiment, by Guy Ware, tells the story of identical twin brothers, JJ and Charlie. Born in 1932 to parents who considered themselves communists, the boys were orphaned during the war. Their older sister took them in when they returned from their countryside evacuation, encouraging them to continue with their education. JJ became an architect, working for the local council to provide housing for the working classes. Charlie was a quantity surveyor at a company contracted to build these homes, replacing overcrowded inner city slum dwellings condemned as unfit for human habitation.

When the tale opens, eighty-five year old Charlie is trying to put together a eulogy for JJ whose funeral is the next day. As he reminisces about their long lives the reader learns of their political inclinations, how these weren’t enough to prevent their exemplary aims ending in failure. They wanted to provide decent accommodation for everyone as a right, alongside the post war years’ free education and health care. The modern tower blocks commissioned suffered structural defects and people died as a result.

Despite his apparent socialism, Charlie was something of a snob. When required to work on projects outside of London, he was disparaging of the regions. Even in the city he was wed to the particular area in the south-east where he grew up. JJ opts to live in one of the tower blocks he was responsible for having built, continuing to do so for as long as he was able, perhaps as a way of assuaging his guilt for signing off a design that proved flawed. The brothers were successful professionally but remained aware that some of the lucrative deals they accepted came with questionable backhanders.

What we have here then is a story of two brothers that mirrors the birth and death of the ideals of the welfare state. Conceived to provide for everyone, when everyone was pale skinned and recognisably local, it envisaged a future utopia for the ‘right sort’ of working class family. When the political landscape changed neither Charlie nor JJ could avoid facing the compromises they had accepted, and what these had cost. The vast increase in social housing stock was followed by right to buy, gentrification, and then privatisation. JJ reacted by withdrawing. For a time, he and Charlie lost touch.

The writing style captures the voice of an elderly man whose body may be failing him but who is not yet ready to join his dead brother. They may have been identical twins but were also individuals. In telling their story the reader is reminded that socialism in Britain has always been multifaceted. The interweaving of countrywide and family politics is masterfully done. 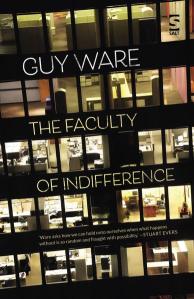 The Faculty of Indifference, by Guy Ware, drew me in from the start but couldn’t always hold my full attention. The story has various strands, as stories do, and some were more compelling than others. I persevered and was glad I did despite particular sections failing to engage.

The protagonist of the story, Robert Exley, does not work for an insurance company, although this is what his employer instructs him to say if asked by outsiders. Instead he jokes that if he answered the question he would have to kill the inquirer. He has also been known to say this to his seventeen year old son, Stephen, who asks him each evening, “How was it today?” This started as a joke because Stephen felt he had taken on the role of wife in their household of two, cooking dinner and deciding what shopping would be needed. Robert’s wife – Stephen’s mother – died when the boy was a toddler. Robert has never sought to replace her.

People die, this is inevitable. When Robert was twenty his father killed himself, although by then the older man had been living away from his wife and son for many years. Like Robert, his father worked for the Faculty – Robert’s wife, Mary, had worked there as well. Robert had recruited her and she had become a rising star despite her frowned upon choice to have children.

Mary had spoken to Robert about the importance of cultivating indifference. On a bad day at work – as a result, perhaps, of failing to instigate action – many people could be killed. Such incidents must be lived with.

Robert’s role is to ensure that nothing happens. He is given files on suspects and may order surveillance and intervention. In a city the size of London it is not possible to watch every potential terrorist. Those working for the Faculty must make choices based on disparate facts and occasional observation. They must never talk about what they do.

The story covers the years just before and after Stephen attends university. Like his mother, he is interested in philosophy. He keeps a journal that he writes in code and that his father takes to work to be deciphered. They never mention this strange form of communication. They rarely talk about anything of import.

As well as the events that make up Robert’s days, chapters detail the contents of Stephen’s journal. Working for the government intelligence services brings with it suspicion and a need for secrecy. The interlinked webs of truth and fiction can be a challenge to differentiate.

Stephen is interested in his paternal grandfather and writes about the man’s life, even though the details he has been told are limited. I found these sections of the story slow to read although they prove notable later.

Robert’s days are of more interest until he is assigned a task dealing with a prisoner and a game of Go commences. The convoluted threads then slowly come together. The reader must decide which moves have been feints.

Key elements in the story are the importance of past and future to the present. Death hovers in the background and Robert appears to almost look forward to his. Stephen has also shown an interest yet Robert refuses to confront how his son is feeling.

“His argument concerned only the prolongation of an intolerable present for fear of – in the certainty of – an even more intolerable future. When you reduced life to that dilemma, was it possible to remain indifferent? Was one forced to live as if life might not be intolerable, forced to hope that it might even be improved?”

The denouement is something of a monkey puzzle with plenty to chew over but an undercurrent of melancholy. Stephen and Robert’s story may finish but the work of the intelligence services remains.

A story of grief and its many facets, of abandonment and strategies for self-preservation. This was a complex and not always comfortable read.