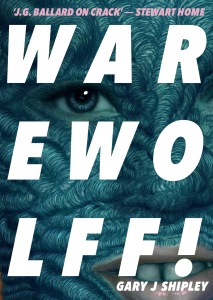 Warewolff!, by Gary J Shipley, is a collection of prose poetry that is intentionally the antithesis of linguistic beauty. It takes a mash-up of recognisable deformities and inverts them, playing with what is considered distasteful and thereby mocking what is socially acceptable. Perceptions and behaviours are stretched beyond possibility but at its heart is the hypocrisy of what modern man will tolerate when he chooses to look away.

The pieces included are between half a page and three pages in length. Reading and trying to interpret them put me in mind of a walk through a high end art gallery. I was aware that there was more to each offering than I was appreciating but from time to time an image would resonate.

As an example, the following excerpt from Foot Glut put me in mind of how a lover attempts to own their beloved, yet in doing so causes change that is unlikely to be desired. They spoil what they loved by attempting to keep it only for themselves.

“I cut off his feet to keep him from leaving. It would take a month, perhaps two, but a new pair always grew back. This was the first of many taunts. I was receiving an education. I was being told that if I wanted to keep something I’d have to mutilate it, and keep mutilating it. That that’s just how things are kept, how lives are maintained. Eventually I cut off his head, and waited for that to grow back. But it didn’t happen. Instead a spider came and nested in the neck. Suspecting it of laying eggs, I killed it with a rolled up magazine.”

Throughout the collection the human body is deconstructed, reactions to what it contains masticated and regurgitated. Few baulk at the idea of taking in other’s saliva when kissing, sexual gratification occurs when a lover is willing to allow semen to enter an orifice, yet who would consider swallowing faeces? The imagery offered is grotesque but it raises questions.

Likewise, few wish to think about the animal parts eaten in processed food. What is done to bodies – human and animal – is twisted to extreme. Actions considered ordinary – sex, cosmetic surgery, transplants, eating, disease – are perverted and then presented in gory, stench filled detail. Cruelties that should be shocking yet are not so far from what is known to happen, kept at a distance where they may be ignored, are reimagined – starvation, rape, incest, cannibalism. The language used is not always easy to interpret and is often weird, intended to sicken.

The raw stream of consciousness with which each piece is narrated is explicit and disturbing. Direction is often unclear, language difficult to elucidate. It is a fantasy horror show that is grimly challenging, horrifically portrayed with a chilling detachment. What is conveyed is appalling, but also appallingly familiar.

Not a book intended to be read for enjoyment, I found myself less upset by it than by more prosaic offerings where men behave abhorrently yet are treated as typical lads having fun. There is no fun to be had in this book, but shocking behaviour is seen for what it is. Man may not do exactly what is detailed but somewhere, someone is doing something as dreadful.

Warewolff! is published by Hexus Press.