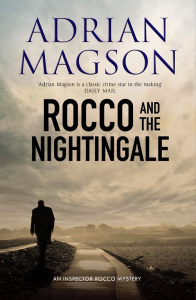 Rocco and the Nightingale, by Adrian Magson, is the fifth novel in the author’s Inspector Lucas Rocco series of crime thrillers. It is the first to be published by The Dome Press. Set mainly in rural France in the 1960s, the protagonist is a competent and diligent police officer. It is refreshing to read a crime novel with a main character whose work is not affected by troubling personal issues.

The story opens with a murder on a lonely back road near Picardie in 1964. Rocco and his team are called to investigate but can find little evidence other than the body. Just as it looks as though the victim may be identified, Rocco is taken off the case and assigned to protect a senior government minister ousted from the Gabon Republic in central Africa. Unhappy with this new role Rocco can’t quite let the murder investigation go.

Using trusted contacts in Paris, links with a criminal gang and the recent murder of a former police officer come under Rocco’s scrutiny. It would appear that an assassin may have been hired for a series of vengeance killings and Rocco himself could be a target. Although willing to take additional precautions, Rocco does not let this potential threat affect his work. When fellow policemen are gunned down where he should have been the extent of the danger is brought home.

Rocco risks the wrath of his superiors by travelling to other jurisdictions to investigate further. With a far reaching case to solve involving a vicious gang leader out to prove himself and a killer who appears to believe he is fireproof, Rocco’s willingness to follow procedure will only stretch so far. He suspects his superiors of ulterior motives.

Having cut back on the number of crime and thriller books I am willing to read, as so many merged into each other, this story proved worth making an exception for. It is comfortably paced with a good mix of interesting characters. The plot concentrates on solving the crimes without veering into unnecessary subplots such as romance. It is deftly written with enough humour and warmth to balance the gruesome detail of much of the action. Despite being part of a series it reads well standalone.

An engaging police procedural set before many modern methods of crime detection and communication became available. Rocco may enjoy more than his fair share of luck in garnering relevent information and in survival, but this is a well put together, entertaining read.

My copy of this book was provided gratis by the publisher, Dome Press.