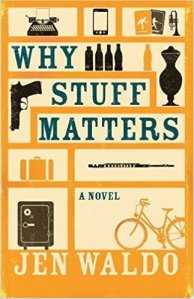 Why Stuff Matters, by Jen Waldo, is a story of grief, avarice, ageing, and the suspicious resentments that define those whose lives have amounted to little more than material possessions. Set in a run down mall in small town Texas, USA, its cast of characters would garner sympathy if they weren’t so ornery and grasping. Into this mix is thrown the protagonist, Jessica, who has inherited the mall from her mother and moved in to escape the pain of the life she had built and then lost. Her moral compass has been displaced by anger and heartache.

Jessica sleeps in the cavernous third floor of the mall. Unlike her elderly tenants she has few possessions. When the story opens a tornado is building that passes through the town leaving a trail of devastation in its wake. Hard won belongings stand no chance against such a capricious force of nature.

Amongst the dead is an octogenarian named Pard Kemp who had rented a booth in Jessica’s mall. Pard left no family and had never specified what was to become of his stock in the event of his death. The remaining tenants waste no time in dividing his stuff amongst themselves. They vie with each other in an attempt to ensure that if anyone gets more than the others it should be them.

It falls to Jessica to arbitrate, despite knowing that whatever decisions she makes will be regarded as unfair. When guns are found in Pard’s booth she puts them in her safe, giving the tenants two weeks to agree how they should be removed as she refuses to allow unlicensed firearms to remain on her property. Another tenant, Roxy, asks to borrow one as her ex-husband is in town and she claims she is in danger. Within days Roxy has shot the man dead.

What follows is a series of events leading inexorably towards a reckoning. A body must be disposed of, the police distracted from the scent of wrongdoing. Into this mix arrives Lizzie, the twelve year old daughter of Jessica’s husband from his first marriage. Without agreement Lizzie is foisted on Jessica for the summer. The girl quickly finds herself a place within the politics of the mall, a young novelty fawned over by the elderly tenants eager to profit from her presence. Lizzie and Roxy each trigger further situations against which Jessica quietly rages.

The plot is in many ways farcical yet it is presented with an adroitness that enables the author to portray issues of loneliness, ageing and the value of humanity over things. Each of the cast of characters has reason to rail against much that life has demanded of them. Their greed, foolishness and sense of righteous entitlement were still frustrating to read.

The writing flows and the plot is well paced leading to a satisfactory denouement, possibly the only uplifting part of the tale. I suspect other readers may find humour in many of the scenes depicted. With more people living into old age the growing elderly population will be as mixed in morality as any other demographic. It is interesting to see them cast here as rogues, using their ailments to gain advantage.

A well constructed, thought-provoking read but, for me, too relatable not to be dispiriting.

My copy of this book was provided gratis by the publisher, Arcadia Books.