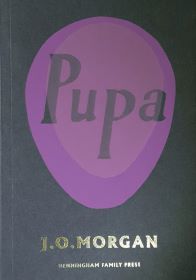 Pupa, by J.O. Morgan, is another triumph from the Henningham Family Press. The author has created a story of the pains and pleasures of young love – although the emotions portrayed are never described in this way – that is eerily disturbing. It explores repercussions when one party chooses to move in a new and unanticipated life direction.

The protagonists – Sal and Megan – are not human as we would understand the term, and yet they populate a world recognisable for its behaviours. The power of the novel comes from the skill with which this world is built and gradually revealed, avoiding detailed exposition yet giving the reader everything they need to know to understand why choices are made. What comes to the fore is how any future remains unknown until personally experienced, however much research and preparation is undertaken. Even those trusted will, at times, prove unpredictable.

The story is divided into two sections – early phase and late phase. It opens with Sal in bed at home recounting a dream, and provides the first descriptions of what we will learn are known as larvae – the juveniles of the population. Sal lives with his father, Madox, although this older being is also a larval.

Adults exist, such as a family acquaintance, Inspector Augustine, who claims he wants to help Sal with whatever decisions he makes. Free choice and support is available, but the young do not always fully understand or trust the vague promises and reassurances of their elders. Occasional transcripts from radio broadcasts suggest a strange type of propaganda is being deployed.

The larvae are humanoid if not human. The young are fragile creatures but as they grow become capable of working repetitively. I was drawn to examine, as the story unfolded, how every stage in their development can easily be transposed onto our own life choices and changes – emotional as well as physical. Any such comparison is subtle and nuanced, adding depth without clagging the flow of reveals.

Larvae can pupate and, in this world, it is a choice, but one that comes with risk. Lurking in the shadows are beings who choose to destroy potential lives, something Augustine’s job requires him to investigate and which he attempts to share with Sal.

There are areas of housing within the locality of the setting regarded as dodgy, in which goings on are kept hidden despite authorities being aware of what is likely happening there. Sal and Madox are just beginning to explore what lies beyond the routine of their safely controlled day to day, although doing so individually. Each wants to share with the other but fears their disapproval.

The undercurrents may be disturbing but this is not a horror story. Rather, it holds a mirror to our own supposed civilised existence, reflecting attributes that discomfort when stripped of veneer. The precision of the prose is impressive, enabling the plot to retain pleasing momentum even as it percolates.

The build up to the denouement is imaginative while oozing trepidation. The author skilfully renders some of the costs of maturation.

As with every book from this press, the physical form is something special. From the feel of the cover through the artistic end papers and quality typesetting, the complete product is a pleasure to hold and peruse. All this would, of course, add little if the story told were not so beguiling and engaging. An audacious and highly recommended read.

My copy of this book was provided gratis by the publisher, Henningham Family Press. 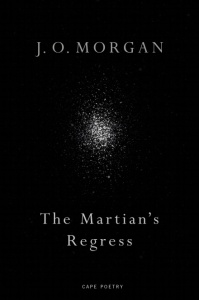 This review was written for and first published by Bookmunch

At some point in the future, the human race has irreparably plundered the planet it inhabits thereby destroying its life support system. Knowing that this was coming, preparations had been made. A select group travelled to Mars carrying specially developed seeds and other essentials that could survive the environment to be developed in the inhospitable new territory. Over time, these first martians and their descendants adapt and assimilate with the new order created. Their raison d’être is survival by whatever means.

The Martian’s Regress is a powerful long poem that tells the story of this new world’s development and how its inhabitants evolved across generations.

Divided into sections, an all too familiar one deals with the unexpected arrival of another rocket on the planet. The travellers who disembark display an

“old-world pallor
That caused consternation
A worry that such feebleness might spread.”

“At length, a decision –
The men were tied off
The women sewn up”

Meanwhile, a martian daughter is offered toys and beauty treatments, despite her obvious antipathy to such fripperies. Her future is made clear when she is handed over to a willing partner and discovers: ”‘the nursery – its row of empty cribs.”

More time passes and there is curiosity about what became of the old planet, abandoned so long ago. The protagonist of this poem, The Martian, boards a rocket and travels there. He takes with him basic supplies for the journey and a companion.

“She was made to be non-marking
Her body was wipeably clean.

That doubled height
Those gangly limbs
The overt femininities

All relics of an ancient era”

Sections of the poem cover the journey. Others provide background on how the colony on Mars came to be. Given the likely makeup of the original travellers, their priorities are not surprising however depressing this is.

The Martian arrives on the old planet and sets out to explore what remains. He enters a museum. Unable to make sense of the purpose of exhibits he rearranges them for his own amusement, breaking items at will. He enters a cathedral, light diffused by a stained glass window that he breaks to let the unfiltered sun shine in. He observes colossal angels perched on a balcony and pushes them to the ground far below, watching dispassionately as they shatter. None of this is done with a sense of ruination. The Martian cannot fathom any value in these things. He does, however, take away a crucifix to which a suffering Christ is nailed.

“Here was something the martian could relate to.
Due punishment was always worthy
Of prominent display”

The Martian and his companion come across a well with a sign seeking gold that wishes may be granted. The companion drops a bank’s reserves of ingots into its depths, adding jewellery, even teeth. To The Martian this is a harmless pursuit. Gold will not sustain him. I pondered what the companion may have wished for.

Although sections of the poem jump back and forth across a lengthy timeline what is being portrayed is an interesting and always accessible variation on a dystopian theme. By writing it as a poem, the story remains taut and reverberates. There is little that is uplifting in the behaviours portrayed.

Any Cop?: Challenging in places due to its content but written in a language that draws elements of humour even from dark places. A warning, if anyone remains willing to engage.