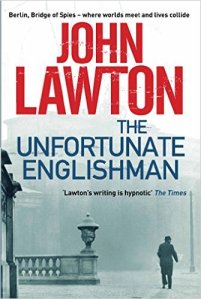 The Unfortunate Englishman, by John Lawton, is the second book in the author’s Joe Wilderness series. It is a spy thriller set in Europe after the Second World War when the Cold War was at its height. I have not read the first book, Then We Take Berlin, and believe I would have enjoyed this latest instalment more had I done so. There are numerous references to incidents from the first book, character history that may have assisted in my understanding of loyalties and generated more empathy than I was able to muster, particularly for the men.

Spy thrillers are not my usual fare. I enjoy the action and escapism of such stories on screen, although not the sexism. I rarely read the books which inspire the adaptations so was looking forward to perusing this contribution to the genre from an author who garners high regard from respected sources. Having read the book my advice is thus: if this author photograph from the back flap of the book appeals to you then so may the book. I find the placement of the person on the left distasteful. The book is undoubtedly well written, but I like to think that men can be better than the ones who populate its pages.

The story opens with a shooting in Berlin in 1963. The protagonist, Joe Wilderness, is found beside a woman bleeding out from a gunshot wound and is taken into police custody. His release is facilitated by his former boss and father-in-law, Burne-Jones, on condition he returns to his job in MI6. Joe Wilderness is once again to be a spook, only now he will be required to work behind a desk rather than in the field.

Two characters are then introduced in some detail. One is a Russian spy who is assigned a stolen identity that will enable him to live and work in England. The other is an Englishman who is approached by Burne-Jones and willingly goes undercover to Moscow to steal military secrets. Both are ensnared by their covert alter egos, relishing the life that hides what they really are. Both play a game with lover’s lives leading to the deaths of others which they struggle to confront.

Certain elements of the story are glossed over. Joe Wilderness has a mistress, Nell, as well as a wife. Another character enjoys a ménage à trois. It all felt too much like a male fantasy. Whilst there are feisty and intelligent female characters the men seemed too brutish to empathise with. The plot was captivating but certain characters stereotypically two dimensional.

What I did enjoy was the history, and the asides on class prejudice and social mobility. The action moves between London, Berlin, Moscow and Vienna during the years when they were being remodelled to encompass the political debris created by the outcome of the Second World War. During the coarse of the story the Berlin Wall is put in place and the aims and attitudes of the various government representatives made for good reading.

This is a well constructed tale that fits the mould of spy thrillers I have watched on screen. I would therefore recommend it to fans of the genre. It is a fandom I am unlikely to join.

My copy of this book was provided gratis by the publisher, Grove Press UK.