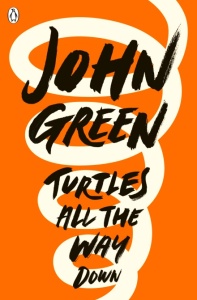 Turtles All the Way Down, by John Green, tells a story riddled with scenarios that appear implausible yet is still satisfying to read. Set in Indianapolis, the protagonist is sixteen year old Aza who is plagued by OCD. Her best friend, Daisy, works an after school job at Chuck E. Cheese to enable her to save money towards college. When she hears the news that a local billionaire businessman has gone missing, and there is a large reward on offer for anyone who can help locate him, she decides that Aza and she should investigate. Several years previously Aza attended a camp – aimed at children who had lost a parent – with the man’s son, Davis. Despite living just across the river, Aza has not been in touch with Davis since.

Daisy writes popular Star Wars fan fiction and Aza is forever scouring the internet for information on the infections she fears. They put their collective on line skills together to find out all they can about the case. Daisy also hatches a plan to bring Aza and Davis back together. Despite his clear understanding of what is behind this sudden reunion, the lonely boy is drawn to Aza and they start to date. Meanwhile, Daisy gets together with Mychal, a talented arty student, which changes the dynamic of the girls’ friendship.

What we have then is a story of American teenagers and the troubles they each face. Daisy is portrayed as poor while Davis is incredibly wealthy yet each is seeking some of what the other has but cannot enjoy fully. Aza is so self absorbed by her serious mental health issues, she struggles to interact with anyone meaningfully. The strength of the story is in the multi-dimensional portrayal of lives, dreams and attitudes – the study of what a person actually is.

“I look into myself, there’s no actual me – just a bunch of thoughts and behaviors and circumstances. And a lot of them don’t feel like they’re mine. They’re not things I want to think or do or whatever.”

Davis copes with his loneliness by reaching out to the world through his writing. Aza finds solace in his blog posts – she is more comfortable connecting on line than in real life. She wants them to have a relationship but struggles to get past her obsessive fears. However unlikely certain aspects that frame the story may be, the author writes vividly of how his characters’ think and feel. The problems faced by both those who suffer with OCD and those who care about their wellbeing are painfully evocative in their clarity.

This is an emotive but never mawkish tale about friendship, the cost of love and dependency. A fluid and engaging read for those who can accept the seemingly unrealistic framing.

Turtles All the Way Down is published by Penguin.