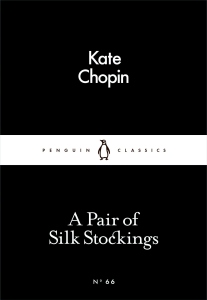 A Pair of Silk Stockings, by Kate Chopin, is a collection of five short stories. This small, distinctively bound book is number 66 in the Penguin Little Black Classics collection. 80 classic titles have been published to celebrate the 80th anniversary of Penguin Books and retail for 80p each in the UK. I could buy three for the cost of a cup of coffee.

My purchase of this book was unplanned. I picked it up from the display box sitting alongside a bookshop till, adding it to my acquisitions in much the same way as I may treat myself to a chocolate bar whilst at a supermarket checkout. Unlike a chocolate bar this pleasure will last.

Having read and enjoyed The Awakening I was interested in reading other works by this author. These short stories offer the same thought provoking challenge and depth as her novel but in bite size chunks. Her approach to the chosen subjects proved controversial at the time of writing and is, unfortunately, still relevant today.

Her themes include racism, privilege, freedom, prejudice and a women’s expected role in society. Her characters are presented fully rounded and all too believable, their varied lives personalities and emotions bared.

At less than 60 pages long this is a quick read but be warned, the quality of writing and questions engendered will linger. 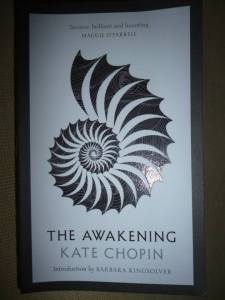 The Awakening, by Kate Chopin, is a powerful work of literary fiction that was condemned in its time for suggesting that a women may want more from her life than a husband, children and a comfortable home. Published in the USA in 1899 it tells the tale of Edna, a wife and mother who awakens to desires that polite society refused to acknowledge in its female members. From a life spent acquiescing to the wishes and expectations of family and acquaintances, Edna starts to consider her own thoughts and feelings and, most shockingly, to act in a manner of her choosing.

There is so much in this book that reads as depressingly timeless. Her husband is materially kind and generous to his family, but cannot comprehend how this may not be enough for his wife. The men they mix with talk incessantly of themselves with little regard for the women so long as they are supportive and act as required and expected. The women gossip and flirt but rarely converse, even amongst themselves, with candour.

Upon observing with some chagrin the changes in his wife, Edna’s husband’s first reaction is to ponder her state of mind:

‘It sometimes entered Mr Pontellier’s mind to wonder if his wife were not growing a little unbalanced mentally.’

Concerned by the unexpected instability in his comfortable and ordered life, he consults with a doctor who asks:

‘has she been associating of late with a circle of pseudo-intellectual women?’

The insertion of pseudo rang so familiar. Over one hundred years later, too many men still struggle to regard women as mentally and intellectually their equals.

Despite the risks of association, Edna entertains men to satisfy her desires, a shocking idea at the time and one which led to her book being condemned as ‘immoral’.

‘[He] meant absolutely nothing to her. Yet his presence, his manners, the warmth of his glances, and above all the touch of his lips upon her hand had acted like a narcotic upon her.’

Edna did little to hide from others the change she was undergoing. A friend cautioned her:

‘The bird that would soar above the level plain of tradition and prejudice must have strong wings. It is a sad spectacle to see the weaklings bruised, exhausted, fluttering back to earth.’

In the end though, the object of her imaginings turned out to be not so different to the other men, only able to regard her as a woman and not as an intelligent being.

‘He looked at Edna’s book, which he had read; and he told her the end, to save her the trouble of wading through it, he said.’

The Awakening is beautifully written, telling an insightful story that provides a social commentary which could almost be contemporary. Having said that though, I was disappointed with the denouement. I regretted that this woman, who had shown so much strength and insight, could not avoid the trappings of expectation, of a wish to be with a man.

As an early feminist work it is well worth reading, not least to consider the furore its publication caused. It has interesting characters, a compelling plot and is a true page turner. Such a shame that its protagonist could not, after all, find contentment living with herself; that she felt the need for the presence of another to make her life feel complete.

My copy of this book was provided gratis by Lizzie from These Little Words.