The Exiled, by Kati Hiekkapelto (translated by David Hackston), is the third book in the Anna Fekete series of crime thrillers (you may read my review of the second, The Defenceless, here). This latest story is set in and around the town of Kanizsa, Serbia, where Anna is taking a much needed holiday with her mother and brother who now live in the area. Anna was born in Kanizsa but finds its customs and expectations invasive having acclimatised herself to life in Finland. She and her family have many friends eager to renew their acquaintance with a young woman they regard as a success. Some grew up with her parents and talk intimately about her late father who she barely remembers. Anna questions where she now considers home.

The story opens with a suicide. It then moves back a couple of weeks to take the reader through events leading up to this death. Anna has only just arrived in town and is attending a local wine festival with her former friends. The convivial atmosphere is shattered when her bag is stolen, the thief using the crowds to assist in his getaway. Anna gives chase but to no avail. Her friends casually blame the gypsies, an assertion that annoys the more broad-minded visitor.

There are tensions in the town due to the growing number of refugees arriving from conflict zones around the world. Along with the Romani they are blamed for rising crime and a faltering economy. When Anna’s bag is recovered, albeit stripped of cash, credit card and passport, a Romani man, found dead, is blamed and the police close the case. Anna is dissatisfied with their investigation and reluctantly decides to check things out herself.

Anna is a brittle yet determined young woman. Her somewhat abrupt manner is mirrored in the prose. It evokes a bleak situation shadowed by corruption and undercurrents of fear. Given the current problems in Europe the agitation felt by many of the characters is prescient.

Anna uncovers a disturbing series of events that suggest respected citizens are routinely breaking the law. There have been miscarriages of justice but, when itinerant people are involved, few seem to care.

The writing remains sharp and focused throughout, flowing deftly as the true darkness of the tale is revealed. Anna is a complex, vulnerable yet strong and admirable protagonist. This was a taut and satisfying read.

This post is a stop on The Finnish Invasion Blog Tour. Do check out the other blogs taking part, detailed below.

The Exiled is published by Orenda Books and is available to buy now. 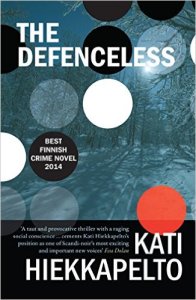 The Defenceless, by Kati Hiekkapelto (translated by David Hackston) was perfect reading for a weekend when the media was overrun by privileged Europeans wringing their hands over what to do about an influx of desperate refugees seeking sanctuary, yet wary of upsetting their own comfortable lives. This is the second in a series of crime thrillers featuring investigator Anna Fekete, who herself fled a warzone as a child. Set in Finland the tale is as dark and challenging as the Scandinavian weather.

The reader is introduced to Sammy, a Pakistani Christian who was smuggled into Finland alongside the heroin grown to “feed the hungry veins of Western Europeans”. We learn that he too is an addict, hiding from the authorities since his application for asylum was rejected. We meet Macke, the small time dealer from whom Sammy buys his regular fix, and witness the death of the first of the story’s victims. Vilho, an old man and a neighbour, enters Macke’s apartment to complain of loud music, and suffers a violent end.

The author makes no attempt to present the growing number of refugees in this cold, Finnish town as upstanding members of the community; they include criminals and addicts. There are also those who are highly educated and wish to work but cannot make use of their superior skills until granted asylum, a process which can take many years spent eking out a living with whatever menial jobs they can find, the constant threat of deportation hanging over them.

Senior Constable Anna Fekete and her work partner, Esko Niemi, have their own problems with addiction, to alcohol and nicotine. When Vilho’s body is found, hit by a car driven by the economic migrant, Gabriella, the first thing to rule out is if she was drunk or high whilst driving. I pondered how the reader would feel towards this pale skinned, young women had she been found to be temporarily impaired; how this would contrast with the dismissal of the dark haired and dark skinned asylum seekers whom Esko wishes to send home, even if to their deaths, rather than have them feeding their habits on ‘his’ streets.

Such comparisons run through the various threads of the story adding depth and challenging reader perceptions. The futility of such nationalistic attitudes is highlighted in Anna’s musings on her beloved grandmother:

“Grandma, that dear, wonderful, wise, warm-hearted lady who had never once moved house, but who had still lived in five different states. The borders moved, rulers came and went, names changed and maps were redrawn”

Anna and Esko have more than just the death of an old man and a few illegal immigrants to deal with. As their investigations progress a blood stained knife is found in woodland and an elderly woman, living in the same apartment complex as Vilho and Macke, is reported missing. Their boss at the Violent Crimes Unit, Chief Inspector Pertti Virkkunen, is also concerned with wider issues. Intelligence reports suggest that a powerful crime syndicate, calling themselves the Black Cobra’s, are trying to establish themselves in Finland and could ignite a turf war with the resident Hell’s Angels. He believes that the drug dealers in Anna’s case may be linked to this bigger problem.

There are numerous plot lines to follow: the treatment of legal and illegal immigrants; the impact of small and big time criminal gangs; Anna’s disquiet about Gabriella; the relationships that adult children have with their relatives. The author throws in such asides as how distasteful some find the idea of geriatric sex, and how fearful a consumerist society is of oil supplies running out despite the fact that man lived without it for centuries.

Alongside all of this Anna must deal with the casual racism and misogyny of her colleagues. She is lonely with her family far away but eschews a relationship as the men she meets wish to turn her into their idea of what a woman should be. There is darkness but also humour. I shivered in the raw landscape, felt wary of the brooding woods. Esko may not have been likeable but I empathised with his pain.

The best crime fiction offers so much more than the solving of crimes. This book offers a twisting and turning plot presented within a raw and tightly written narrative. It also takes the reader inside the heads of every character, enabling them to see their world anew.

A powerful and captivating read that I did not wish to put down so finished in a day. I will be absorbing the thoughts elicited for much longer.

My copy of this book was provided gratis by the publisher, Orenda Books.