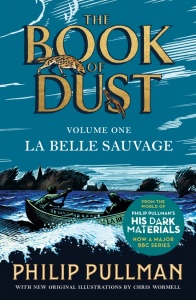 La Belle Sauvage is the first book in Philip Pullman’s The Book of Dust trilogy – the prequel trilogy to his ever-popular His Dark Materials. As someone who grew up with His Dark Materials, I was excited to return to the world of daemons and magic – but also wary. Spinoff series are famed for never being as good as the originals. Given that, La Belle Sauvage was a pleasant surprise.

The book follows Malcolm Polstead, the eleven-year-old only child of a pub landlord. Malcolm is an intelligent and inquisitive child, well-mannered and keen to help everyone he comes across. He goes to school but understands that education is not really an option for him – he’ll take over the pub from his father or go into a trade instead. When he can, Malcolm volunteers at the local priory, helping the nuns in the kitchen and catching them up on all the news he overhears at the pub. However, his life is turned upside down by the sudden arrival of a baby at the priory – Lyra, the daughter of Lord Asriel, hidden away for her own safety.

La Belle Sauvage is split into two parts, unevenly weighted. The first follows Malcolm’s life in Oxford – his friendship with the nuns, his work at the pub, and the growing influence of a mysterious branch of the Church at his school. In my opinion, this is the stronger part. There’s less otherworldly fantasy, with the focus instead on building the characters and community setting. Malcolm is an absolute sweetheart, fiercely intelligent but completely naïve in the ways of the world. It’s a pleasure spending time with such a nice character. His relationship with the nuns – especially Sister Fenella – was heartwarming, and I loved his interactions with Dr Relf. There are regular cameos from characters we know from His Dark Materials – Lord Asriel, Marisa Coulter – but no real knowledge of the original trilogy is required. The feel is very different, and it’s all the stronger for it.

The second part is shorter, faster, and action-packed. This is where the fantasy element really comes into play, with witches and fairies and hidden lands. Despite being a huge fantasy fan, I thought this was the weaker part of the book. Malcolm continued to be a delight, and his evolving relationship with his companion, Alice, was interesting and well-handled, but the additional elements after such a slow, steady start were confusing and almost felt rushed. The writing was as great as ever, but the switch of pace was jarring and disconnected me from the story – I wasn’t as invested in some of the dramatic moments as I should have been. This would have worked better as an entirely slower book – stretched out like an epic fantasy – or an entirely faster book, with less of the build-up in Oxford and a tauter overall feel.

That being said, I enjoyed reading, and I think it’s a strong addition to the canon. Philip Pullman is undoubtedly a fantastic writer and he’s managed to create a collection of new characters that I care about just as much as the originals – a difficult feat in a spinoff series. I’m excited to see what happens to Malcolm and Alice – and, of course, their daemons Asta and Ben – next. (After all, we already know what happens to Lyra).