‘Shadow and Bone’ is a solid, fast-paced example of the YA fantasy genre, now back in the spotlight due to the new Netflix adaptation. Its not perfect, but its creative, eminently readable, and a very strong debut novel.

For centuries, the nation of Ravka has been divided in two by the Shadow Fold – an area of near-impenetrable darkness filled with monsters that feast upon those who enter. The nation’s only hope lies in the legend of the Sun Summoner – a Grisha who can summon light, finally destroying the Shadow Fold once and for all. Alina Starkov, an orphan and cartographer, has never put much stock in Grisha legend – but when her regiment’s crossing of the Shadow Fold goes awry, she finds herself suddenly being proclaimed the Sun Summoner of legend. Whisked away to the luxurious world of the Grisha, Alina struggles with her new identity. Can she, a mere orphan, possibly be the saviour of Ravka – or is she doomed to fail them all?

Alina is the sort of strong character you want to root for. Stubborn and in many ways childish, she’s full of flaws, but she has a good heart and wants to do the right thing. Her struggles with identity are beautifully written and very impactful. Alina is an example of the Chosen One trope done well – despite being powerful, her naivety and moral dilemmas prevent her ever being too strong, and its abundantly clear that she has her limits.

This being an early 2010s young adult novel, naturally there’s a love triangle. Love triangles aren’t a trope I’m particularly fond of, but this is one of the strongest examples I’ve read, simply because it’s never entirely clear which character she’ll choose. There’s Mal, another orphan who grew up as her best friend – steadfast and loyal, but uncomfortable with Alina’s new power and status. Then there’s the Darkling – General Kirigan, the commander of the Grisha armies and the most powerful Grisha alive. The Darkling is captivated by Alina, proclaiming her his only equal – but he has many secrets, and Alina is never sure how much she can trust him. Alina’s dilemma between the two always feels authentic. The romance elements develop very well, with less predictability than might be expected, and it makes the situation much more readable than love triangles often are.

The setting is one of the book’s strongest parts. Ravka is inspired by Eastern Europe, but the way the Shadow Fold has influenced politics and society is fascinating. There’s also clear tension between Ravka and the surrounding nations, which despite not being the story’s focus is well woven in. Ravka is a very two-tiered society,with clear differences between the powered Grisha and ordinary humans, and again the tensions this creates are well explored. Bardugo has gone on to explore neighbouring areas like Ketterdam and Fjerda in subsequent spinoff series’, and her talent for worldbuilding is undeniable.

Overall, ‘Shadow and Bone’ is very much a novel of its time, packed with the tropes pervasive in all early 2010s young adult novels, but its one of the strongest examples of those books. For those interested in the show, the book is definitely worth a read first. Recommended for fans of strong worldbuilding, the Chosen One trope, and general young adult fantasy. 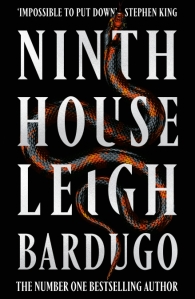 Leigh Bardugo is well-known in the world of young adult fantasy fiction for the Grishaverse – originally a trilogy which has now expanded to include a related duology, with another series in the works. Ninth House, however, was her first adult fantasy, marketed as having a much darker tone.

“All you children playing with fire, looking surprised when the house burns down.”

Ninth House is a slow builder. It follows the story of Galaxy Stern, known as Alex, a school dropout and drug addict who ends up in hospital, the only survivor of a mysterious tragedy. In an unlikely turn of events, Alex is visited in hospital and invited to join the upcoming Freshman class at Yale. Why? Because Alex is one of the few people in the world who can see ghosts – known to those in-the-know as Grays.

This is definitely not a book for the faint-hearted. It’s dark, twisty, and full of unknown power and magic. However, it leans heavily on mystery, and that means the first 100 pages or so can seem confusing and even drag as the story begins to take shape. Leigh Bardugo’s other work is known for being fast-paced and action packed – this is the opposite, the slowest of slow burns as secrets are gradually revealed. In many ways, it reads less like a fantasy novel and more like a mystery or thriller which happens to contain the supernatural.

“Peace was like any high. It couldn’t last. It was an illusion, something that could be interrupted in a moment and lost forever.”

Alex, is a fantastic, multi-faceted character. She’s lived a tough life but come out tougher. She’s always been able to see ghosts, but as a child didn’t realise that others couldn’t see them too. Bardugo explored the way this would shape your personality brilliantly, and didn’t shy away from the negative aspects of Alex’s psyche. Alex’s reaction to Yale – filled with smart but entitled young adults who’d never known true hardship – was also an excellent examination of how those from alternative backgrounds can struggle with the education system; not because they’re not capable, but because the others there see them as an outsider and they never feel like they fit in. I wanted to wrap Alex up in blankets and give her biscuits and tea – although she’d probably see that as condescending and have some choice words in response.

Darlington, Alex’s mentor at Yale, was her polar opposite. A man from a wealthy family with a long history at Yale, he epitomised everything that she despised. However, as they got to know each other, they realised they weren’t so different after all. Darlington was an interesting character who I would have liked to have more ‘screentime’ so to speak – I’m hoping he plays a more prominent role in any sequels. (I’ve also seen several comparisons to Gansey, and I agree that they would get along like a house on fire – and possibly set a house on fire too).

Dawes, who started out as Alex and Darlington’s assistant with the occult, was possibly my favourite character. I loved her. At first glance, she appeared sweet and trusting, but she had a spectacularly deadpan sense of humour. Dawes loved rules and order but wasn’t afraid to break them when the situation called for it. She epitomised Hufflepuff in the best way. Who says Hufflepuffs can’t be the badass too?

Overall, this book starts too slowly but builds into a great story with a fascinating cast of characters. It’s extremely dark in places and explores a number of sensitive issues, but I think it manages to avoid just throwing them in for shock value. Fans of crime, mystery, and horror are likely to love this.

*Trigger warnings: This book contains graphic scenes including rape of a minor and mentions of substance abuse*