Today I am delighted to welcome Lesley Downer, author of a quartet of novels set in nineteenth century Japan. This was a time when the country was convulsed by civil war and virtually overnight transformed from rule by the shoguns into a society that looked to the west. Lesley has written that:

“At the end of the war the Women’s Palace was closed down for ever and the three thousand women who had lived there, some of them all their lives, to serve the shogun, were turned out onto the streets. I wondered what became of them all, for most were from families on the losing side, who had been defeated in the war. But all were sworn to secrecy and few ever revealed anything of what had gone on behind the closed doors of the Palace. My imagination went to work and thus this series of novels was born.”

The Shogun’s Queen is the fourth book to be written but serves as a prequel to the series (you may read my review here). Knowing that Lesley has a personal affection for the country I asked if she could share some of her experiences. 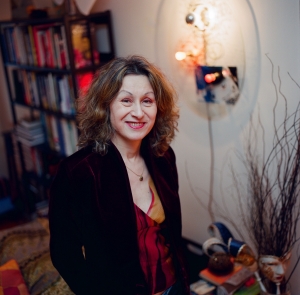 Hello, Jackie. First of all let me say how happy I am to post on your blog today. I greatly appreciate it.

In Kyoto recently with my husband, we visited the Golden Temple, made legendary in Yukio Mishima’s famous novel The Golden Pavilion. It’s a breathtakingly beautiful building, walled with gold leaf, light as air, almost floating in the middle of a lily pond, with delicate balconies surrounding it and a golden phoenix perched on the top. 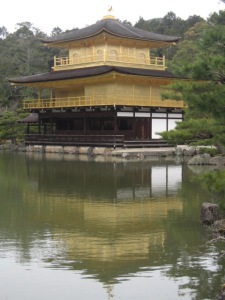 ‘Japan is a very aesthetic place,’ was my husband’s response.

It’s quite true. For me the seed of Japan was planted more than thirty years ago when I read Bernard Leach’s A Potter’s Book. He wrote of the Japanese aesthetic approach to life. In Britain, similar-sized handmade pots by a particular potter all cost the same. In Japan you can have ten similar-sized pots. Nine will cost Y1,000 (£5). In one something will have happened in the firing. The glaze will be little different, maybe there’ll be an unexpected flash of colour, what looks like a flaw that to the Japanese eye gives it beauty. That pot will cost Y10,000 or maybe Y100,000.

Once the seed was planted I realised that a lot of things pointed towards Japan. I was eating Japanese food, reading Japanese literature in translation. At the time I was teaching English to foreign students in Oxford. One, Yoshi, was Japanese. He wanted private classes but had no money to pay for them. So we did an exchange and he began teaching me Japanese.

When I applied for a job teaching English in Japan, Yoshi warned me that behind every temple there was a factory. But I didn’t believe him. I found myself in the grey industrial city of Gifu, in autumn, when all the rice has been harvested and the paddy fields look brown and threadbare. I’d told my Japanese interviewer that I wanted to be not in Tokyo but the countryside. But I hadn’t realised that the Japanese word for ‘countryside’, inaka, just means the provinces, anywhere that isn’t Tokyo. It means ‘the sticks’ – and that was where I was. I was in the backwater of a backwater – I was in the suburbs.

My first year was tough. Most people in Gifu had never seen a foreigner before. I’d travelled on my own; I’d been a lone backpacker. But I’d never felt so isolated. It was three months before a colleague informed me that there were a couple of other foreigners in this city of half a million people. I rushed with huge relief to meet them. They became good friends.

My colleagues all took care of me. In my time off they took me to see sword making, local festivals, paper making, cormorant fishing. But I still found myself on my own a lot.

I taught myself Japanese. (As we were the only foreigners there were no Japanese teachers to teach us – and while people could read English very few spoke it fluently.) I was a bit of a star. I was invited onto Gifu television to talk about my impressions of Gifu and local colleges asked me to give them conversation classes.

I immersed myself in Japanese literature and in its wildly romantic history. I read the tale of the eleventh century Genji the Shining Prince. I read of samurai armies battling, of a hero who led his band of warriors straight down a vertical cliff face to attack the enemy camped on the beach and how that enemy – including the baby emperor – fled into the water and were drowned, which is why the crabs’ shells there look like samurai helmets to this day. I went to productions of kabuki and Noh theatre, watched dramas about spurned women who turn into terrifying ghosts who moan and tear their long black hair out, about warriors bringing back an enemy head to present to their lord in a head box (a crucial piece of warrior equipment) …  There was plenty to fuel my imagination, enough to fill a lifetime of writing.

I also hitchhiked. Japan is an entirely safe country and people are extremely kind. By the end of my first year I’d been up to the north of the country and down to the far south and fallen in love with Japan.

Five years later I finally came home. But I had unfinished business. I’d always wanted to follow the seventeenth century haiku poet Basho’s Narrow Road to the Deep North through northern Japan. So I went back. Naturally I hitchhiked. I visited some of those legendary places I’d read about in literature, such as the bend in the river where the giant Benkei stood, arrows poking out of him like a porcupine, holding off a thousand of the enemy single handed. There, centuries later, Basho sat down on his straw hat and wept and composed a haiku. And even more centuries on I too stood right there and breathed the same air and looked at the same river.

On that journey I stayed with farmers in remote farmhouses, a bit like B & Bs. They all knew the history of their small villages and shared my love of Basho. I met poets in small country towns and we wrote poetry together.

Modern Tokyo is a thrilling place. People that visit Japan are always a bit puzzled. The country looks so western with its skyscrapers yet somehow it feels different, foreign. I’ve found that seeing Japan through the lens of history makes it look entirely different. When I know the history a dingy little temple in the country suddenly comes alive. And Japan is so full of stories that cry out to be told that I could spend the rest of my life doing just that.

For me one of the most heart-rending stories is that of Princess Atsu who went to Tokyo, which was then called Edo, to marry the shogun. And that’s the story that I tell in The Shogun’s Queen.

The Shogun’s Queen is published by Bantam Press and is available to buy now.

The Shogun’s Queen, by Lesley Downer, tells the story of Okatsu, the daughter of a minor Japanese lord, who is taken from everything and everyone she knows to become wife of the most powerful ruler in the land, the Shogun. It is set in the mid nineteenth century when Japan was invaded by those they referred to as barbarians – well armed traders sent from countries in Europe and America. The cherished culture and rituals of the Japanese way of life was thereby changed forever.

Okatsu has never known poverty but, as the political machinations of the lords and princes of her region propel her ever higher up the strictly preserved social and political hierarchy, she discovers wealth beyond comprehension. Those who have acquired these riches and the power it brings are loath to risk relinquishing it. They will stop at nothing to strengthen and secure their position.

As a woman Okatsu has little choice in the course her life must take. Whilst she accepts this she also rails against the loneliness she must endure. There are few she can trust. She is watched constantly and is required to obey. When she grows close to her husband this is seen as a threat as well as a distraction by those who demand her compliance, whatever the cost to herself.

The world depicted is close to unimaginable for modern sensibilities and offers an insight into a way of life that those living it fought to preserve despite the gross inequalities. The powerful men kept palaces of women locked up for their own personal use. When a ruler died this household was required to take holy orders and spend their remaining days praying for their master’s spirit. Some of the women were chosen for their youth and beauty yet never spent time with the man who owned them and could never belong to another. They endured a life filled with sniping and backstabbing, locked up forever in a luxurious prison.

The descriptions of the barbarians are particularly interesting – how what is unknown is feared, as is change. There were plenty who were intrigued by the gifts presented by the invaders – telescopes, cameras, steam engines, weaponry – but they regarded the smelly, hairy, meat eating giants as uncivilised if dangerous buffoons.

I found the pace of the story slow at times, as was court life for the women at the time. There was much repetition as Okatsu grappled with her assigned quest, her loneliness and her feelings of betrayal. The treatment of children in the Shogun’s household was particularly difficult to comprehend.

The story is a fictionalised account of true events. Each of the characters existed and their roles are as accurately portrayed as remaining accounts allow. The author has a personal fondness for the area and was meticulous in her research.

For those interested in Japanese history and in the effects of the spread of western influences around the world this is a worthwhile read. As a story I would have preferred a tighter telling, but it is a fascinating window into a way of life where change was opposed, yet where it is hard not to regard such change as a progression.

My copy of this book was provided gratis by the publisher, Bantam Press.