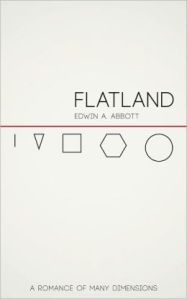 Flatland, by Edwin A. Abbott, is one of the oddest books that I have ever read. Published in 1884 it tells the tale of a square, a resident of a two dimensional world, and his discovery of an incredible third dimension when he is visited by a sphere from Spaceland. Many of his fellow plane dwellers think him deranged, just as the resident of Lineland whom he met in a dream would not accept the existence of a second dimension because it was beyond his direct experience and comprehension.

Using mathematics the practicalities of these various worlds is explained. Each is imbued with strict hierarchies and rules alongside enhanced senses that allow order to be maintained. Much of it came across as disturbing, such as women in Flatland being the lowest of the low (almost a straight line) whereas rulers and priests were of the highest order (circles).

Children born with irregularities were generally killed at birth with any survivors forbidden to reproduce. Amongst the higher orders it was common to subject offspring to life threatening procedures in an attempt to increase the number of sides they had and thereby improve their social standing.

I struggled with the lengthy explanations in the first half of the book. They may have been clever in places and necessary for understanding but I found their presentation somewhat tedious. By the second half however the tale had become strangely readable. I had to get past my distaste for the eugenics in order to appreciate the allegorical timbre. I suspect that this story was created with a strong dose of irony, at least I hope it was.

Observations were often offered lightly, such as the suggestion that the single resident of Pointland (no dimensions) was happy because he knew no better and had no one around to disturb his simple thoughts with difficult questions. There was a recognition that the lower orders were more likely to accept the unequal society if they believed that there was a chance that they or their children could one day benefit from the way things were. Aspiration was encouraged even if many were considered expendable.

This strange little story, once it got going, turned out to be an oddly satisfying read. It posed interesting questions about how much we really know and how averse we can be to new ideas that threaten a familiar way of life. It demonstrates how those in power manage the masses for personal gain.

At a little over a hundred pages the book did not take long to read. Despite the messages it conveyed it was in no way preachy. I enjoyed the mathematical explanations and the quirkiness of the ideas. I would have some reservations about recommending this book but am glad that I persevered.