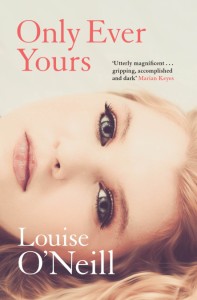 Only Ever Yours, by Louise O’Neill, is set in a dystopian future where ice caps have melted, sea levels risen, and survivors are concentrated within three main zones: Euro, America and Chindia. In the early days of this new world order the people who survived wanted only boy babies. Potential parents purchased gender specific fertility drugs. Unwanted daughters were considered unworthy of increasingly scarce resources and were dumped in mass graves. With families unwilling to countenance raising girls, extinction loomed as a possibility.

“Genetic Engineers were forced to create women to ensure the survival of the human race. And since they had the opportunity, it would have been foolish not to make necessary improvements in the new women, the eves.”

These lab grown babies are placed in nurseries until they are four years old when they move to schools. For the next twelve years they are educated for their role in society. Some will become companions to the Inheritants – the boy babies born more naturally – and be required to birth and raise their sons. Others will become concubines, providing whatever sexual favours the Inheritants demand. A few will become chastities and help educate the next batch of girl babies.

The rules state that women must be beautiful, look youthful and weigh in at a target weight.

Women must be calm, quiet and compliant, never crying or showing any signs of Unacceptable Emotions. Failure to follow the rules can lead to being sent Underground or to the Pyre. Those women who please the men sufficiently may continue to exist until their Termination Date. Even those who are granted a redesign to preserve their youthful looks are not permitted to live beyond forty years of age.

“All eves are created to be perfect but, over time, they seem to develop flaws. Comparing yourself to your sisters is a useful way of identifying these flaws, but you must then take the necessary steps to improve yourself. There is always room for improvement.”

The story is told from the point of view of sixteen year old frieda as she enters her final year of school. Her best friend, isabel, has become distant over the summer break leaving frieda unmoored and afraid. She has a deep seeded need to be accepted, harbouring thoughts that she is not good enough or beautiful enough. She feels forced to try to befriend megan who oozes confidence and uses her acolytes to ensure she retains her power within their year. megan is ambitious and voices frustration when she is not provided with benefits she hears others are granted elsewhere.

“I can understand her wanting to leave the Euro-Zone, with its four thousand inhabitants and increasingly limited budget, but most of the world’s money is in Chindia now. It may have been the Americas who came up with the idea for the Noah Project, but it was the Chindians who funded the development and construction of the Zones. Np one else could afford it.”

Over the course of the school year the reader learns of life within the school and the limitations girls are required to accept. In the final few months, under strictly controlled conditions, they begin interactions with the Inheritants. These boys will then choose who they want as their companions, most of the remaining girls being transported to the Main Zone to become concubines.

The opening chapters set the scene and introduce this appalling world. Towards the middle of the book the pace slows, the daily activities and concerns growing repetitive. There are only so many descriptions of clothes, shoes, hair styles and make-up along with associated insecurity, jealousy and bitching that I wish to read – even though it is this preoccupation with female looks that is being addressed in the tale. The tension ratchets up as the Ceremony – when the girls will learn what their future is to be – is just a few days away. The denouement is devastating yet perfectly encapsulates the society that has been created.

The author writes in her Afterword

Written with young adults in mind this is a book that can also be appreciated by an older audience who may benefit from a reminder of the pressures faced by young women in our contemporary society. Despite my criticism of the pace, it is a story well worth reading.

Only Ever Yours is published by riverrun.

My copy of this book was given to me by my sister. 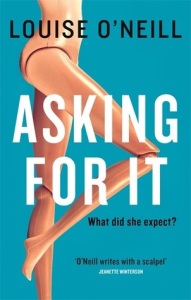 Asking For It, by Louise O’Neill, takes the difficult subject of the alleged rape of a beautiful but drunk teenage girl at a party, and explores society’s reaction when the details are graphically shared in the public domain. It is a challenging read because it tackles so many issues that are rarely discussed between victims and the people they know. The subject may be debated by strangers, but close to home it causes embarrassment and discomfort. Large numbers of women have lived through such experiences but choose not to share, because this is the reaction they expect.

Emma O’Donovan is eighteen years old, beautiful and confident, loved by her family. For as long as she can remember she has been Daddy’s princess. Her mother tells her that with looks like hers she will have the world at her feet and she anticipates this shining future. At school she is surrounded by girls who admire her, whose jealousy she feeds off. Boys cannot help but look her way and she knows she could have any of them. She tests this regularly.

Emma once overheard a boy describe her as boring, a comment which still smarts. When others are lauded for any achievement, attribute or possession, she will quietly disparage. She works hard to appear kinder and more interesting than she feels; what matters is that she is noticed and admired. She is attracted to boys others want.

Emma despises her mother for the way she puts on a front for the neighbours and tries to maintain her aging looks, subduing the fear that they are alike. Mother’s passive criticism of her daughter irritates. Emma requires approbation so hides all traits that she knows would garner disapproval. Her parents believe she is a good girl, raised in a good family, and that she will behave in the way they have programmed her.

The pivotal night is a typical party until Emma loses control. Her friends blame the alcohol and leave her to it, distracted by their own dramas. The next morning Emma cannot remember what happened. Her friends are furious with her for how she behaved but she believes, if she remains strong, all will blow over and she will be forgiven. Then pictures appear on social media.

The fallout is depressingly accurate in its portrayal of how society reacts to allegations of rape. Emma was drunk and dressed in revealing clothes. She led a boy into a bedroom. In many people’s eyes she was asking for it and should not complain, the case should not be brought to court. Boys will be boys, what else did she expect?

Emma’s parents try to be supportive but cannot move beyond their own shattered illusions. They struggle with the concept of having a daughter who does not behave as they were convinced their daughter would. From basking in their child’s reflected glory they must now face a community that is blaming her for ruining the glorious futures of young men from good families such as theirs. Several of their parents were long time friends.

Emma herself has no idea how to cope and cannot talk about how she feels. She is adept at burying her true thoughts deep. All she can see in her head are the photographs. All she can hear are the comments that were posted underneath by those she considered her minions, her friends. This is a child on the cusp of adulthood, a teenager with all the difficulties and peer pressure that entails.

The judgements of others can be devastating, how much more so for a young person whose life revolved around garnering adulation. In the wider public eye she is That Girl about whom everyone now has an opinion. She is surrounded by pity and contempt.

The author wishes this book to trigger wider discussions about consent. Society continues to blame rape victims for not acting in a manner that they can approve rather than blaming the perpetrator for assuming that they have rights over someone else’s body for spurious reasons. Victims are shamed; bringing shame on one’s family is treated harshly. Sexual conquests continue to be admired.

Although written for young adults this is also an important book for parents. Emma’s experiences were harder to deal with because of her parent’s reaction, their palpable disappointment when she did not turn out to be the daughter they wanted.

Ultimately though it is society that needs to change. Sex is not shameful. Those mature enough to indulge should be mature enough to ask for consent. Giving consent is a personal choice, not one that should be frowned upon due to gender. This story raises the issues. Let’s be brave enough to discuss openly and respectfully with all.

My copy of this book was provided gratis by Annette, whose blog may be found here: Sincerely BookAngels  I am grateful for her generosity is sending it to me.