If you are unfamiliar with the early story of Ross and Demelza Poldark then please be aware that this post may contain some spoilers. I also refer to one plot line which has not yet aired in the current TV series.

I am very old. Thus I remember, back in the day, watching the original television adaptation of the Poldark novels by Winston Graham. How I enjoyed that series. It even led to one of my first acts of rebellion. My Brownie Guide leader had been trying to instill a sense of competition in her charges as to who amongst the older girls should carry the unit flag at a ceremony to be held in our church. I was smarting from the perceived insult of not having been made a Sixer (this did happen eventually) and informed Brown Owl that I would prefer to spend my Sunday evening watching the latest adventures of Ross and Demelza. She was not impressed.

My sister bought herself the Poldark books and I read them avidly. At first my heroes behaviour fed my aching heart, but then they began to act in such a silly way. I persevered but the joy was gone. Why couldn’t they all have just stayed with their loves and lived happily ever after?

I was content to dislike Elizabeth who, having made her decision, should have tried harder with Francis. George Warleggan was easy to despise. It was Ross who hurt me so. I still feel disappointed when I hear of people giving in to temptation as he did. How can they expect such behaviour to ever cause anything but pain and regret rippling out amongst those they know and are supposed to care for?

All of these years later and the remake is causing quite a stir. The stills did not appeal to me with their objectification of Aiden Turner, the actor chosen to play Ross.

In my view, Eleanor Tomlinson could never be Demelza after the wonderful Angharad Rees. 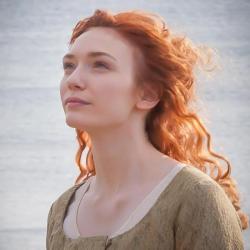 However, I dislike being left out of the conversation. A few episodes in and I realised that I was enjoying the remake as much as I had the original. The actors have made these parts their own.

This time around I am seeing the story through different, older eyes. I also know where the plot is going.

At the end of Episode 4, Ross tells Demelza that he loves her. I have stopped watching here. I want to imagine that he will continue to be kind, generous, loving and giving. I don’t wish to watch the handsome hero fall.

In the books that I choose to read, the films that I enjoy, I am not a happy ever after sort of person. I find such a premise unrealistic. Life goes on and is never going to be entirely sunshine and roses. Why then does this story affect me so? What is it about the character of Ross that evokes such a desire that he should continue to be true to the young serving girl who loves him and who he took for his own?

The only other fictional character I can think of who has affected me in this way is Mr Darcy, but Pride and Prejudice finishes when he and Elizabeth wed. The reader is not required to consider what happens next.

Mr Darcy may have raised Elizabeth’s status in society but not to the extent that Ross did Demelza. In quite literally picking her up from the gutter and then teaching her how to be a lady Ross changed Demelza’s life irrevocably. His character is shown to be caring of all; he should have appreciated how far his wife had come for him and treated her more generously. He himself should have behaved better.

I recognise that I am intolerant of those who seek the excitement of the new when experience shows that hurting those we should be caring for is never going to lead to a happy outcome. The new all too soon becomes the mundane and, whilst it is possible to forgive, it is not possible to forget. My cynicism when I hear of affairs or marriage breakdown is reflected in my generally negative attitude towards fictional romance, except it would seem for Ross Poldark.

The first four episodes of the series see Ross rebuild his home, his land, his mine. He offers practical help to his tenants with jobs and housing. He rescues an urchin and, despite the disapprobation of his peers, marries her. He tells her that he loves her.

Ross’s willingness to work, alongside his disinterest in how society views him, makes him so very appealing to me. When he falls all those admirable qualities are tarnished.

I have still to decide if I will watch beyond Episode 4 although I wonder how my older eyes would view what is to come. I wonder how much understanding I have gained in forty years of living, and if increased tolerance of such behaviour would be a good thing.

Do you have any fictional characters who affect you deeply?

The A-Z of You and Me, by James Hannah, is a love story, a tragedy and a history of a life. The tale is told by the forty-two year old protagonist, Ivo, who has recently become a resident in a hospice. A kindly nurse suggests that he keep his mind occupied by playing her game which involves taking each letter of the alphabet in turn, thinking of a body part for that letter and remembering a story from his past associated with it. The reader is thereby introduced piecemeal to his recollections from boyhood, family life, school days, friendships and Ivo’s attempts at making his way into the adulthood to which he aspires.

Burdened by toxic friends Ivo makes many bad choices. He recalls a beloved who offered him the chance to break away from his acts of self destruction. As he compiles his A-Z the reader slowly comes to understand how close he came to happiness and how he blew it all away. Whilst being frustrated by his foolishness it is hard not to feel sympathy for the high price he paid for his mistakes.

The writing is assured and believable. The presentation allows Ivo’s story to be told gradually but the pacing is never slow. As the chunks of his life story are woven together there is no attempted justification. There is love and regret but also humour. Despite the imminence of death there is nothing mawkish about this tale.

Throughout the book the readers emotions are challenged. It is raw, real and does not shy away from the messiness that accompanies a life lived, a modern death dragged out by medical intervention. Ivo could have been so much more. Despite his many mistakes I cared.

A Place Called Winter, by Patrick Gale, is a beautiful, sweeping saga of love and loss. Loosely based on the author’s own family history it tells the tale of Harry Cane, an English gentleman whose mother died giving birth to his brother when Harry was four years old. Cared for by a nursery maid until he was old enough to be sent away to school Harry barely knew his father who chose to grieve for his wife abroad. By the time he too died his boys had settled into a bachelor life of wealth and privilege, their only family each other.

Harry was an introvert with a stutter. He followed the expected conventions of the time but shunned social interaction when he could. Thanks to his brother’s more gregarious nature he was introduced to the woman who would become his wife. However, their settled life by the sea had to be abandoned when financial dealings went badly wrong. Soon after this Harry started an affair which, when discovered, led to his banishment abroad. He chose to seek a new life on the wild Canadian prairies, and ended up at a place called Winter.

Harry worked hard on his plot of land, made friends and settled down. He could not, however, rid himself of the attentions of a misogynist and bully who had taken an interest in him whilst on the boat to Canada. This man’s actions threatened to undo all that Harry had achieved.

The plot is compelling but it is the style of writing that drew me in. The evocative prose put me into the heart of every scene as I felt each character’s pain, uncertainty, triumph and despair. Harry was a good man, ill equipped to cope with those who would take advantage of his nature. He was born into a time when society punished those who dared to find love outside of narrowly prescribed convention.

The unfolding story made my heart ache. The injustices of a narrow minded society hurt. That such prejudices still exist today, even if no longer enshrined in law, shows that we still have some way to go before we may consider ourselves a civilised society.

Read this exquisite story, enjoy the beauty of the writing, the depth of the plot. This book has the potential to change a reader’s way of thinking. I cannot recommend it highly enough.

The Night Circus by Erin Morgenstern is a glorious assault on the senses. Full of sumptuous, descriptive prose that reads like poetry in places, it takes the reader on a fabulous journey through time where nothing can be taken for granted. Just as visitors to the circus wind through seemingly never ending pathways and tents filled with wonder, sometimes exploring new vistas, sometimes criss crossing back along well trodden paths; so the plot twists and turns but never disappoints as it develops it’s characters and exposes just enough of it’s secrets to elicit a gasp of delight or fear as the reader guesses at where they could be going next. It is dream like yet deliciously believable in so many ways.

The book is at heart a love story with allegorical undertones. The writing is rich but never cloying, the author’s imagination both original and delightful. Nothing is easy for the protagonists as they slowly decipher the secrets behind the lives that have been chosen for them, yet this is not written as a tragedy but as a lesson in hope. The lessons that they learn about how an individual’s actions impact all around are universal.

I particularly liked the constant references to how most do not take notice of what is happening right in front of them, how most will not believe what they see if they have been conditioned to think in a certain way.

I read this book over two days, having to put it down from time to time to absorb the imagery and think through the latest nugget of understanding as another layer in the mystery was peeled off. It is not a difficult read but should not be skimmed. By allowing the story to permeate I became absorbed in the tale, feeling satisfied if somewhat bereft when the book was concluded.

I am told that it has received mixed reviews from readers; I do not understand why. I thoroughly enjoyed immersing myself in the fantasy world of the Night Circus, in the idea that magic could exist and be learned. Who can truly say what in life is illusion and what is real? Those who have not read this book have a treat in store should they choose to indulge.