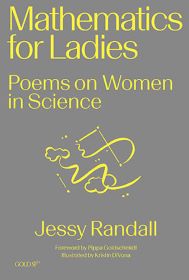 “Why do they insist on thinking
that women are, by nature, foolish?
They block us from learning
and then mock us for not having learned.”

It is well known, for anyone who has been paying attention, that females have long been discouraged from pursuing a career in the STEM disciplines. This has not put off a great many women scientists throughout history who, despite the significant obstacles placed in their way, and despite their male co-workers often taking the credit, have been responsible for many remarkable and life changing advancements.

Jessy Randall has taken a cross-section of these pioneers and created a collection of poems, each focusing on aspects that affected one individual in pursuit of her interest. The tone is almost playful although the facts conveyed make for sobering reading. The costs to women in science – from family opprobrium through to the stark choice between work or children, and then myriad health issues suffered from working on experimental processes – were not enough to put off these women driven to find answers to their challenging hypotheses.

Some chose to marry although perhaps to enable a working partnership that did not draw criticism.

“The truth is I married for science,
it was a way in. Like
a radiate, I got what I wanted
without attracting undue attention.”

Others railed against the expectations placed on them despite their professional achievements.

“Stop requiring women
to be charming and delightful!
Just let us do our work.”

Although readers may be familiar with many of the names included and their discoveries (despite the barriers placed in their way) there may be others whose stories are less well known, or whose contribution has not been widely credited.

“No, I didn’t tell my husband. Why
should I have? I didn’t need his permission.
It was my money built those cars.”

In amongst the success stories are episodes of sadness, and the double standards under which women often suffer blame.

“I neglected my daughter no less
than her nihilist father did.”

Certain ‘discoveries’ are mocked by the woman credited as being typically human centric – a plant or creature previously unknown to man that nevertheless existed quietly, undisturbed, and therefore more likely to flourish.

“No, I didn’t discover the Peninsular Dragon Lizard,
except in the stupidist, most human sense.”

Women who were key in moving science forward but in collaboration with men were so often reported as mere assistants, if mentioned at all. Perhaps, it is posited, it is not the female who is the weaker sex.

Sometimes there are more pertinent reasons for women stepping back when men seek to excel. Lise Meitner worked in the science labs at the University of Berlin…

“I was the mother of nuclear power
and I laughed all the way away
from the Manhattan Project, in which
I refused to participate.

In that project, the men who worried
about my hair created enough fire
to burn 200,000 bodies down to nothing.”

It is sobering to consider how some things do not change however much supposed progress is made. Prejudices remain ingrained whatever proofs exist.

“In 1949, Granville was one of only two
African-American women to earn a Ph.D.

Two years later, she was denied entry
to her national conference. The hotel was whites-only.

In mathematics we say a number is even
if we can divide it by two,

or to be more precise, if we can divide it
evenly by two. Anything can be divided

by two. Anything can be divided.”

The best poetry is as accessible as it is profound, conveying a depth of considered opinion in succinct language that is both elegant and coherent. This collection, as well as being fascinating, at times rage-inducing but always entertaining and engaging, provides a masterclass in how to bring poetry into the literary mainstream. It deserves to be widely read for the importance of the message conveyed, but more than that, for the sheer pleasure of reading such skilfully crafted stanzas. Highly recommended for all readers, especially those who may not feel they always ‘get’ poetry.

My copy of this book was provided gratis by the publishers, Goldsmiths Press.