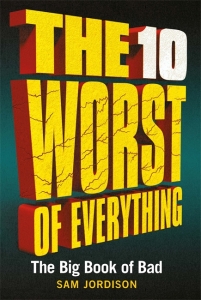 The 10 Worst of Everything: The Big Book of Bad, by Sam Jordison, is a compendium of lists that should spark plenty of conversation as readers randomly dip in. As such it is an ideal stocking filler or book to leave lying on your coffee table. With its unashamedly subjective judgements and authorial prejudices it offers amusement alongside verifiable nuggets to wonder over or squirm at, and wider opinions to debate. Some lists are taken from recorded data, many online so gathered post internet, while others are simply an ordering of the author’s choices on eclectic themes.

Divided into ten sections it opens with Bad Nature which may put you off leaving the safety of your home let alone travelling to far flung outposts of our apparently not so hospitable world. Offered for readers’ delectation are details on: deadly parasites, insects, scorpions, spiders, snakes. Killer plants and fungi are included. The deaths described are painful and not always swift.

The second section looks at various languages and how baffling and difficult they can be to learn. There are lists of: brutal Shakespearean insults, harsh reviews of respected writers, regrettable literary rejections.

Next up is a section on Unpopular Culture, which sparked much discussion in this house. The Ten Daftest Prog Rock Song Titles are, according to my aficionado husband, pretty much generic. We pondered if the author was, perhaps, a tad young for appreciation of progressive rock. Top spot, I was told, should have gone to Pink Floyd’s ‘Several Species of Small Furry Animals Gathered Together in a Cave and Grooving With a Pict’.

The Ten Worst Films were taken from the website, Metacritic, and for us proved too obscure. We were surprised that the Ten Biggest Box Office Bombs didn’t include Waterworld, and this set off a search to see if it was true that part of the hugely expensive set used in this epic sank during filming and had to be rebuilt. Part of the fun of books like this is the tangential debates sparked.

Much like the Booker Prize it seems, the Ten Worst Winners of the Best Picture Oscar gave little credit for effortless entertainment, or even cinematography. We laughed at the list of Ten Worst Christmas Songs and felt our age at music lists populated by albums and tracks we hadn’t heard of. Our musical tastes appear to be looping the vinyl of passed decades.

Having enjoyed this section, the next, The State of Our Nations, once again made travelling appear unwise. Noise, pollution, transport issues and bedbugs all feature alongside the cost of a pint.

The Fun and Games section offers sporting facts, The Ten Worst Things To Do In A Public Swimming Pool, and notable failures at Olympics and world record attempts. Further foolish things that man will choose to do to himself are presented in the next section on Health and Wellbeing.

The focus then moves back to the good old days which were, of course, anything but. Given current circumstances it felt almost comforting to be reminded of the terrible leaders endured over centuries. Accepted facts that have since been disproved are listed along with bizarre treatments and medical procedures once commonly administered.

The section on Modern Life is a reminder that we still do dumb things, including buying stupid kitchen gadgets.

On a personal note again, I had to smile at the list: The Worst Car To Buy During Your Mid-Life Crisis. I have never owned a BMW but do enjoy travelling in our Audi TT.

The penultimate section on The Future amused with its lists of predictions that time has proved wrong. The End suggests ways the earth may end – I do hope it is only foolish man who extinguishes himself and that more deserving lifeforms survive.

The author has no qualms about questioning the intelligence of those who don’t agree with him on certain pet topics. Mostly though this is a fun reflection of his tastes, such as his apparent dislike of vegetables.

A book of lists that I enjoyed reading and will now be leaving out for visitors to peruse. It offered a welcome distraction from the bad things our media endlessly expounds on, and a reminder that we have somehow survived similar and worse.

My copy of this book was provided gratis by the publisher, Michael O’Mara Books.

Literary London, by Eloise Millar and Sam Jordison, is a book that should be read by all lovers of literature who wish to explore our vibrant and ever changing capital city. It is an entertaining guide to London’s literary history from the fourteenth century to the present day. It includes anecdotes on the literati who have congregated in the many pubs and clubs, made their homes in the garrets and mansions, and got together to forge friendships and rivalries. As well as offering up snippets on the writers’ lives, there are maps showing where they lived and worked that readers may walk in their footsteps, or refresh themselves in the watering holes frequented along the way.

In the late twelfth century Richard of Devizes, a monk passing through the city, wrote:

“You will come to London […] I warn you, whatever of evil or of perversity there is in any, whatever in all parts of the world, you will find in that city alone.”

Not to be put off by such a warning, many came. Indeed, even in the fourteenth century Londoners considered themselves a cut above the rest of the country. An eyewitness account of the Peasents’ Revolt described the rebels who invaded as:

“nasty, dirty countrymen, and certainly not from London.”

The authors have divided their commentary into twenty-one sections that readers may easily dip in and out should they wish to explore particular themes. For example, ‘Crime’ looks at many of the detective novels based in the city, and tells of The London Detection Club, a society for writers that still exists today. The code of ethics members must pledge to abide by is included, aimed at sustaining the quality of each author’s work and ensuring their readers be given “a fair chance at guessing the guilty party”.

Although this book focuses on well known and regarded writers, there is acknowledgement of subjectivity in judging literary merit. In the section ‘Modernists and Vorticists’, a series of abstract poems by Edith Sitwell could be described as “an experimental masterpiece or mere doggerel.” There are accounts of sackings by magazine publishers for “liberality towards experimentalists”. The TLS describes a poem by Prufrock as having “no relation to poetry.”

Sitwell and her contemporaries liked to dress up and wear strange face paints. Writers throughout the ages appear to have been fuelled by debauchery and a predilection for the bizarre. This notority was regarded as even less acceptable for women, many of whom changed their names to achieve publication. The fight continues against “the ingrained idea that women should in their spare time knit, sew and leave the thinking to the men”.

Each section finishes with details of key addresses (including closest tube station) and a list of recommended reading. Of course, many of the places mentioned no longer exist. Pubs in which writers congregated have been replaced by chain restaurants, entire streets have been erased for modern development. Where possible, however, the reader may seek out literary landmarks where the stories told here were lived.

There is a guide to a Dickensian pub crawl, a helpful map comparing Shakespeare’s Bankside to Bankside as it is today, a list of addresses where the Bloomsberries held their famous salons, restaurants where readers may “Eat like a Spy”. Talking of spies, there is also a little anecdote within these pages explaining how James Bond got his code number. It is the plethora of snippets such as this which make the book such a joy to read.

From Paddington Bear and Peter Rabbit through to Chaucer’s pilgrims, the lives of London writers and their creations are chronicled for the reader’s delectation. It does not profess to be a comprehensive compendium but the nuggets shared are enlightening. The writing is consistently and assuredly entertaining.

Read from cover to cover then dip into at will. Having discovered the places that nurtured and inspired these London writers, you may well be inspired to make a few outings of your own.

My copy of this book was provided gratis by the authors.