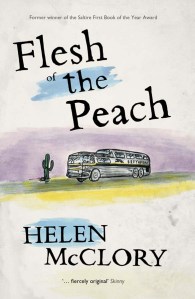 “If I owned a horse, I feel like I would ride it until it dropped from exhaustian under me,’ Maud said […] ‘I wouldn’t stop until it had given me everything and taken me far further than it could.”

Flesh of the Peach, by Helen McClory, is a story of grief, selfishness, and the lasting damage caused by damaged people. The protagonist is Sarah Browne, a twenty-seven year old aspiring artist who, when the story opens, has been rejected by her married lover on the day she discovers her estranged mother has finally died. Raised in a chaotic household of women, where attention was rare and often caustic, she escaped to London as a teenager and then on to New York, a city she now chooses to leave.

Sarah decides to use her newly acquired inheritance to start again, to move to a cabin in New Mexico where she hopes to find the space to consider what she can now be. She takes with her just a few possessions, including a new yellow sundress, but also decades of emotional baggage that she has worked to suppress.

“She placed the newly purchased dress so that it lay across the bed in a pool like sunshine. […] She was going to dress from now on for a beautiful life. Keep saying those words to yourself. It sounds naive but that is one way to choose to exist. As a polished stone skipped across the harshness of things.”

Sarah’s wish is that she be the best possible version of herself, which is the most that any can aspire to be.

There follows a roadtrip in a Greyhound bus, a stay in a soulless motel, and then a drive to her late mother’s cabin retreat in the Southern Rockies. Here she meets a neighbour, Theo, and they embark on an ill-fated affair.

There are flashbacks to Sarah’s childhood in Cornwall. The isolation of the cabin unsettles her equilibrium. Theo falls in love with this young woman whose pressure cooked emotions demand release.

Despite the foreboding atmosphere the writing remains lyrical, the imagery painting both sensation and location. Sarah is delicate and fierce, owning her needs without apology, a female willing to reject societal expectation.

The final quarter of the book lost some of the coherancy which had held together preceding chapters. Nevertheless, the quality of the prose ensured engagement was retained. The denouement was unexpected yet once read could be regarded as inevitable. Disquieting but pure pleasure to read.

My copy of this book was provided gratis by the publisher, Freight Books.