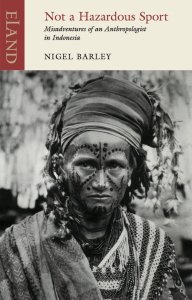 First published in 1988, Not a Hazardous Sport by Nigel Barley offers an account of the author’s travels to and around the island of Sulawesi in Indonesia. For a few months he lived amongst the Torajan people, known in academic circles for the carvings on their buildings and their traditional ancestor culture. Barley interacts mostly with the men and this is reflected in the narrative. As an anthropologist he is there to observe. To get the most from the book the reader would be advised to set aside certain western sensibilities – something I struggled with. I baulked at many of the attitudes described, especially towards women. Certain incidents involving animals were also upsetting.

The author travels to Indonesia to undertake ethnographic fieldwork. Funds are limited so he travels economically. His preparations and the journey, although undoubtedly trying, are recounted with humour. A stopover in Singapore, where he stays with a Malay family, includes a visit to a red light district much to the discomfort of his hosts. This set the scene for conversations that would occur throughout the book. Women are sexually objectified, expected to produce babies and look after the home, children and the men. Whilst recognising that this was the accepted culture I would have liked to read of the women’s thoughts on how they were treated and if they desired change.

Indonesia is described with fondness despite its dangerous transport, mosquito infestations and often uncomfortable accommodation. The author describes the people as largely welcoming – impressive given the appalling behaviour of other tourists. He visits several villages, befriending those he meets and staying in their homes. The exchange rate makes him comparatively wealthy and he enjoys his ability to pay generously for services rendered.

The book is written as a series of descriptions of journeys and encounters. I found the cock fight episode distressing – I suspect the author wished to demonstrate the humour of the situation. A ritual he attended that required the killing of a buffalo offers up a picture of a painful and drawn out death for the poor animal, yet this entertains the local children. In a later chapter a bus driver deliberately runs over a puppy.

Other behaviours described increased my distaste for these men. They would wake up each morning and noisily clear mucus and phlegm from noses and throats – not a scene I want to have in my head.  It was, of course, interesting to learn of western habits that they observed with similar disgust. My recoil is not an attempt to take any sort of moral high ground.

At the time of writing Indonesia was changing. Many traditional beliefs were being abandoned for Christianity. Buildings with galvanised iron roofs rather than bamboo tiles were regarded as modern. Woven cloaks coloured with plant dyes were no longer as popular as those made from rayon.

Following his stay the author invites a small group of men to travel to London and build a traditional rice barn at the Museum of Mankind. The final chapter describes the reaction of these Indonesians to English habits and behaviour. Their experiences have repercussions when they return to their country.

Although well written and witty in places, I struggled to engage with the author’s portrayal. He may have been fond of those he met, impressed by their openness and welcome; my reaction was largely negative. I would have preferred a more rounded representation of a country populated by more than just men. From an anthropological point of view there is much of interest. As a casual reader I was put-off Indonesia.

My copy of this book was provided gratis by the publisher, Eland.