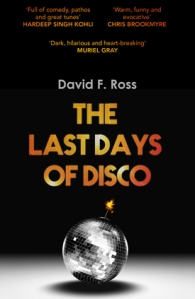 The Last Days of Disco, by David F. Ross, is a nostalgic romp through a town in working class Scotland in 1982. Margaret Thatcher is in power and unemployment is high but for the small time crooks, the long time residents and the emerging youth, life remains largely introverted. Fashion sense may have lost its way but in the pubs and clubs around which local society revolves family, friends and music reign supreme.

The protagonists of this tale are Bobby Cassidy and Joey Miller; best mates, about to finish school and with little idea what to do with their lives. They decide to try their hands as mobile DJs, thereby invoking the wrath of a local mobster, Fat Franny Duncan, who sees their endeavour as a threat to his own tiny empire. A motley crew of characters are drawn in to the turf wars that develop, each adding humour and pathos to the plot.

The comedy is schoolboy level with much being made of cock size, farts and the titillation created by female body parts. All of this is in keeping with the times.

The pathos is more thought provoking. Bobby’s brother Gary has recently joined the army and is called to serve in the Falkland’s conflict, bringing home the reality of war. Decades old family secrets bubble to the surface. The young people may dream but few have managed to move on from the lives expected of them.

The author has created a big hearted story which pulls no punches in the evocation of the times. The soundtrack keeps it upbeat as do the descriptions of clothes, place and attitudes; we really did dress like that. Despite many of the characters shortcomings it is hard not to wish them well.

I read the book in a day, the narrative bringing back memories, a realisation of what is lost and how far we have come. I will dig out my vinyls and re-listen to those songs. The hairstyles and outfits are best forgotten.

My copy of this book was provided gratis by the publisher, Orenda Books.