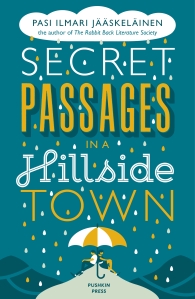 Secret Passages In A Hillside Town, by Pasi Ilmari Jääskeläinen (translated by Lola M. Rogers), is a quirky tale of a middle aged man whose past comes back to haunt him. Its protagonist is Olli Suominen, a husband, father, parish counciller and head of a small book publishing business based in Jyväskylä, Finland. Olli considers his home town to be a monument to dull ordinariness. His marriage has grown stale and he barely knows his young son.

Olli has recently joined a film club and Facebook. A girlfriend from his teenage years, Greta, connects with him on the social network. Greta has written a bestselling book – A Guide to the Cinematic Life – which Olli’s wife buys him for his birthday. It prescribes a new way of living.

“The deep cinematic self is an artist that sees life above all as an aesthetic construct. It is like the voice of the conscience but instead of moralizing it leads us to make cinematic choices and interpret our roles as well as we possibly can. It also silences the stage fright of slow continuum attachment so that stories can be set in motion and cinematicness can be achieved.”

Olli’s publishing house needs to find a new title that will sell well. When Greta mentions online that her current publisher is unhappy with her ideas for her next book – the first in a series of magical travel guides starting with Jyväskylä – Olli suggests that she could publish with him. This business arrangement soon starts to affect his personal life.

The reader is taken back to the childhood summers Olli spent with his grandparents in Tourula, where he first met Greta. Olli was part of a group who called themselves the Tourula Five; they even had a dog named Timi. The children would spend their days going on adventures, seeking out underground passageways, eating picnics, messing about on the river. It was a thrilling time until it all went horribly wrong.

Much of the story seems preposterous but this appears to be the point. A cinematic lifestyle does not require that the script be realistic, only that it be aesthetically memorable, and the writing reflects this.

Greta’s ideas, which include the existence of mood particles in certain places that affect behaviour, are granted potency. The power of suggestion and the adoption of fads is mocked throughout. When characters become inconvenient they are written away without consequence.

Two denouements are offered for the reader to choose from allowing film preferences to be catered for. The big reveal adds a little depth to the somewhat fantastical plot.

This is a story that encapsulates adventure, mystery, romance, fantasy and comedy with references to the numerous films it parodies. As a whole it is kooky, which at times I found irritating, but despite this it somehow works.