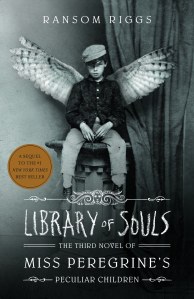 As part of their #SummerReads promotion, Quirk Books sent me the second and third books in Ransom Riggs’ Peculiar Children trilogy (I review the first one here). These books are aimed primarily at young adults and, within a day of their arrival, one of my resident young adults, Robyn, had them read. As my reading and reviewing schedules are currently somewhat packed I decided to ask Robyn to provide me with her thoughts. I posted her review of Hollow City last week – you may read it here. I plan on reviewing both books myself later in the year but, for now, I hope you enjoy reading Robyn’s take on the final book in the trilogy.

‘Library of Souls’ is the third and final book in Ransom Riggs’ ‘Miss Peregrine’s Peculiar Children’ trilogy. It follows the peculiar children as they attempt to locate and free their ymbryne and guardian, Miss Peregrine, and in the process save peculiardom from the threat of their mortal enemies, the hollowgast and wights. Readers are introduced to some intriguing new characters, and there are several twists before everything is neatly wrapped up – as it tends to be in young adult fantasy.

This book focuses on the myths and legends of the peculiar universe. The children have to navigate a new time zone, new peculiar abilities, and an interesting cast of new characters. One of these was Sharon, an obvious reference to Charon – the ferryman of Hades from Greek mythology. The inclusion of a Greek mythological figure seemed somewhat random, but then again the entire premise of the novels is the peculiar. It would have been interesting to have more exploration of the interplay between mythological beliefs and the peculiar in this universe. Sharon’s character was intriguing, but did seem to represent a missed opportunity. It begs the question whether more was included in an earlier draft and cut during the editorial process.

Like its predecessors, ‘Library of Souls’ is well-written, and complimented by an interesting selection of black-and-white images. The trilogy continues to hold its own against other young adult fantasy books. The main weakness with ‘Library of Souls’ is the neatness of the ending. It comes across as rushed, and almost a bit too good to be true. Perhaps the average young adult reader will like the ‘happily ever after’, but I expect some will be left with a lingering taste of disappointment. The book did not take very long to read, so there could have been more explanation without making the ending overly long.

‘Library of Souls’ – and the ‘Peculiar Children’ trilogy as a whole – makes an excellent addition to any young adult’s bookshelves. However, the first book in the trilogy is undoubtedly much stronger than its successors. 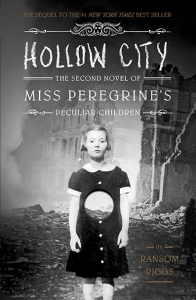 As part of their #SummerReads promotion, Quirk Books sent me the second and third instalments in Ransom Riggs’ Peculiar Children trilogy (I review the first one here). These books are aimed primarily at young adults and, within a day of their arrival, one of my resident young adults, Robyn, had them read. As my reading and reviewing schedules are currently somewhat packed I decided to ask Robyn to provide me with her thoughts. I plan on reviewing both books myself later in the year but, for now, I hope you enjoy reading this, the first guest review I have hosted.

The second novel of Ransom Riggs’ ‘Peculiar Children’ trilogy, ‘Hollow City’ picks up immediately where the first book left off. It chronicles the children’s quest to find a cure for their ymbryne and guardian, Miss Peregrine, who has become trapped in the form of a bird. Their adventure takes them through multiple locations and time zones, and the children make both new allies and new enemies along the way. There are also some fascinating revelations about the various children’s histories. The book delves much deeper into the world of the peculiar, and contains an interesting twist towards the end to set things up for the final novel of the trilogy.

The concepts in the ‘Peculiar Children’ books are not particularly original. Children with powers who must go on a quest from their school-type environment is probably the single most common young adult plot in history, notably done in the Harry Potter and Percy Jackson series’. However, the way this is presented in ‘Peculiar Children’ comes across as new and refreshing. Ransom Riggs succeeds, as in the first book, in writing something that stands out from other books in the genre. The inclusion of peculiar animals as well as humans did come across as a little juvenile – but this could be more to do with the association of talking animals and children’s books than the writing itself.

‘Hollow City’ reads like the typical middle novel of a trilogy. It is well-written, with intriguing new characters and revelations, but it doesn’t stand alone as a strong book in the same way as the first. ‘Hollow City’ would not make much sense without having read its predecessor. As much as the plot is engaging, the feeling persists that the primary aim of the novel is to take the reader from A to B so that everything is ready for the ‘grand finale’ in the last book. It follows a linear journey rather than a traditional story arc. This is especially evident with the ending – the book never really comes to a conclusion, merely hitting another climax then leaving things to be continued in the next novel.

Overall, ‘Hollow City’ is an enjoyable book that approaches the young adult fantasy genre from a slightly different angle. Anyone who enjoyed ‘Miss Peregrine’s Home for Peculiar Children’ will likely enjoy this, but they will probably find it a bit weaker.

Miss Peregrine’s Home for Peculiar Children, by Ransom Riggs, is the first book in a trilogy exploring the world of children born with apparently impossible gifts. These include an invisible boy, a levitating girl, twins with incredible strength and a girl who can conjure up fire with her hands. Because common people cannot comprehend these peculiars, and what is not understood is often feared, the children live apart. Their well-being is overseen by a shape shifting matriarch who can manipulate time.

Into this world stumbles Jacob, a sixteen year old American boy who has always struggled to fit in amongst his peers. When a family tragedy sends him into a spiral of anxiety and recurring nightmares his psychiatrist suggests it may be helpful if he travelled to the place he associates with the source of his fears – a remote island off the coast of Wales where his grandfather lived as a child. Jacob’s grandfather raised him on a diet of weird and wonderful stories which he claimed were true. They were populated by children who could not exist, who lived together on this island in a beautiful house. They were threatened by the monsters Jacob sees in his dreams, which his grandfather talked of but was never believed.

When Jacob sets out to uncover the facts around his grandfather’s early life he finds only a ruin where the children’s home used to be. He looks for clues amongst the debris, asking questions of the locals. He uncovers more than he bargained for, but must then make a choice, just as his grandfather did so many years before.

The writing remains light despite the horrific occurrences threatening the peculiar children’s way of life. Jacob and his new friends must battle forces intent on their demise whilst keeping their existence hidden from those common people living alongside. Their enemies are known to hide in plain sight.

The story is being adapted for a film, directed by Tim Burton, to be released on 30th September 2016. It is a perfect match for the director’s style. Although containing many of the familiar elements in a young adult fantasy, there is much offbeat humour downplaying the fear and poignancy.

Within the narrative are scattered authentic vintage photographs depicting many of the characters. These provide a wonderful addition to the surreal feel. There are also stills from the film and a taster of the next book in the series.

An enjoyable read and an interesting take on a familiar trope. I rarely seek out film adaptations of books as they too often disappoint. Given the strong visual elements and stunning imagery conjured, this may well will be an exception.

My copy of this book was provided gratis by the publisher, Quirk Books.