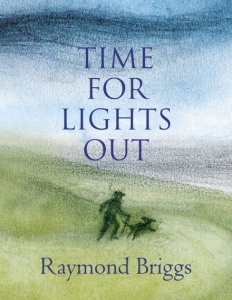 This review was written for and originally published by Bookmunch.

Raymond Briggs is now in his eighties and apparently contemplating life’s end. He has stated that he expects Time for Lights Out to be his last book – it took him over a decade to create. Given the subject matter it may sound depressing but this is not the case. Although searingly honest about an aging body’s failings and inevitable future, the tone is more reflective than bleak.

Throughout the varied entries the author demonstrates an awareness of his increasing frailty. He writes of eating healthy food and taking regular exercise. He still indulges in the wine he enjoys, trying to temper concerns without becoming obsessive. He lives in rural Sussex where the countryside is teeming with life but also deaths, such as road kill. Briggs visits a local cemetery and notes the prevalence of young people buried in his parents’ time. He reads newspaper obituary pages and feels a sense of achievement when he is older than the recently deceased.

The contents of the book are a mixture of: pencil drawn illustrations, comic strips, poems, photographs, quotes, lists, and short opinion pieces. All are based around the author’s personal memories and experiences. Divided into three sections – Now, Then, Soon – they offer a picture of the life Briggs has lived and his concerns about its end. His wry musings cover day to day activities including: walking his dog, habits when at home, interactions with friends and neighbours. Certain memories are triggered by items kept for decades, often unused but hard to throw away due to their history.

“Old people are always absorbed in something. Usually themselves.”

The ‘Now’ section presents Briggs as a seventy-something year old who surveys himself as an old man and is somewhat annoyed that this is what he has turned into. On walks he finds the hills are harder to climb. His days are marked out by routines he and his partner doggedly adhere to. He observes that he has become less tolerant of other people’s appearance and behaviour. All of this is written with unflinching insight and wry humour. Briggs recognises his foibles and failings. Although poignant in places there is no expectation of sympathy.

‘Then’ looks back at: Briggs’ parents, his own childhood, the death of his wife, visiting grandchildren. Much has changed in the world during each of their lifetimes. The lasting effects of the two world wars are remembered along with more welcome advances – illustrated by conversations Briggs has with the young children. He remembers those who have died but acknowledges also that they are sometimes forgotten – that life goes on for those who remain.

“Death hovers around us every day.
Somehow, we close our minds to its closeness,
even when it is just outside the window
or is staring at us from the television.”

‘Soon’ is wound around a fear the author has about ending up in a care home for the elderly. He ruminates over personal possessions that are dear to him and how these would have to be disposed of. He recalls the deaths of acquaintances and that this must one day happen to him. Yet all of this is contemplated without rancour. I found Briggs’ willingness to confront what is inevitable refreshing. Contemporary society is so often eager to avoid acknowledging the prospect of death.

“He who is not anxious has no imagination”

Briggs’ inimitable illustrations are a mix of finely rendered drawings and more blurred images – appropriate when conveying the speed at which time passes (and perhaps the deterioration of eyesight) when on life’s downhill trajectory. The importance of memory in old age, especially of childhood, is given thoughtful consideration. The structure of the book allows the reader to peruse pages without the necessity of reading in order from cover to cover.

Any Cop?: A frank and originally presented memoir depicting what living day to day feels like having exceeded one’s allotted three score and ten years. If this is Briggs’ swansong it is a fitting tribute to his artistic talent and percipient story telling.