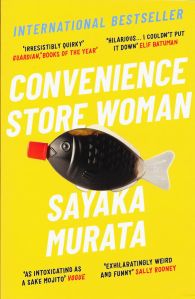 Convenience Store Woman, by Sayaka Murata (translated by Ginny Tapley Takemori), tells the story of Keiko Furukura, a thirty-six year old single woman who has worked in the same small store in Tokyo since her university days. Keiko is content with her situation but her family and friends are unable to accept this. They do not understand why Keiko cannot conform to society’s expectations. She should be seeking a more acceptable career, finding herself a husband, perhaps having children. She is not regarded as normal, and it is they who need her to be.

Even as a child Keiko was considered strange. When other youngsters were upset at finding a dead bird, she suggested it could be eaten. When boys at school started fighting and others begged someone to stop them, Keiko fetched a spade and hit the miscreants over the head. Not understanding why she was then reprimanded, Keiko withdrew into herself and started observing other’s behaviour that she may copy how they went about their days. She would turn to her sister for advice when situations arose that she would have to deal with alone. Her family loved her but longed to find a cure for actions they regarded as inexplicable.

Keiko’s job at the convenience store suits her perfectly. There is a company manual that clearly sets out employee’s desired presentation, customer interaction and how tasks are to be completed. For other behaviours she has co-workers to emulate. Once in uniform she believes they are all cogs in a smooth running machine. She takes pride in her contribution and the role she plays.

A new recruit, Shiraha, threatens the stability Keiko has enjoyed for eighteen years. He enters her life when others have been giving her a hard time over her lack of boyfriend and low status employment. At a barbeque a friend’s husband takes issue with her marital status leading to offers to help fix this.

“It was the first time I’d ever met him, and here he was leaning forward and frowning at me as if questioning my very existence.”

Keiko reveals Shiraha’s existence to her sister and is shocked by the reaction.

“She’d never been this chatty with me before. Seeing how excited she was, it occurred to me that it wasn’t such a stretch to say that contemporary society was still stuck in the Stone Age after all. So the manual for life already existed. It was just that it was already ingrained in everyone’s heads, and there wasn’t any need to put it in writing. […] If it had been that simple all along, I thought, I wish she’d given me clear instructions before, then I wouldn’t have had to go to such lengths to find out how to be normal.”

Even worse is the change in her co-workers’ when they believe Keiko is in a relationship.

“I’d thought the rest of the staff were made up of the same cells as me, but in the current strange atmosphere a village mentality was taking over and they were fast reverting to ordinary males and females. Now only the customers still allowed me to be just a convenience store worker.”

Shiraha is portrayed as a man to be avoided, yet to others he is still better than no man.

Told from Keiko’s point of view the style of the narrative suits the character’s literal, practical and unemotional outlook. There are wryly humorous interactions and observations as Keiko is taken to task over personal choices, despite them affecting no one but herself.

An indictment of societal expectations presented in an entertaining format. This is an enjoyable, concise if somewhat quirky read.

My copy of this book was purchased at Foyles in Bristol.