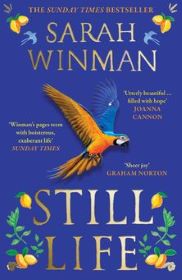 I didn’t seek out Still Life when it was released in hardback. Although I have enjoyed all Sarah Winman’s previous novels, Tin Man was such a tour de force – and achieved in less than two hundred pages – that the prospect of a longer read didn’t, at the time, appeal. I am, however, glad I gave into temptation – curiosity – when the beautifully bound paperback was offered. This novel is magnificent, and I don’t use that descriptor lightly.

The story being told encompasses art and life and love – a sweeping saga that explores the many lenses through which these subjects may be viewed when minds are open to new experiences. It engenders an appreciation of the moments that matter, lighting up the mundane and offering a deeply felt sense of optimism – a willingness to embrace change for what it may bring. Above all it is a story of friendships that enrich and nurture – a reminder that families exist beyond the bounds of blood relations.

Opening in the Tuscan hills towards the end of the Second World War, a chance encounter brings Evelyn Skinner and Ulysses Temper together. Evelyn is a sexagenarian art historian, in Italy to seek out important artworks moved to hidden spaces due to the conflict. Ulysses is a young British soldier who, having survived thus far has hopes of returning to his wife, Peg, in London. Over bottles of plundered fine wine, Evelyn and Ulysses talk of their lives as reflected in the paintings recovered from a cellar. By the time they part from their brief acquaintance, each has had an effect on the other that they will carry through the following decades.

The setting moves to East London where the remaining key players are introduced.  Col – rough around the edges – runs his pub and worries about his daughter, ‘a woman in body and child in mind.’ Peggy Temper works for Col and is watched over by Cress, an ex-dockworker possessing uncanny foresight. Pete is a skilled pianist, always on the cusp of musical success. Finally there is Claude, an inspired if somewhat bizarre addition. Around this group revolve further colourful characters – the shady, the generous and the critical. Each adds depth to the development of the unfolding tale.

The war ends and Ulysses returns to London where he lives and works at Col’s pub. There are births and deaths, marriages and divorces, fights and fortunes that prove life-changing. The setting moves mostly to Florence, a city portrayed as almost mystically magical in its affect on those willing to embrace its ways. Around the edges of everything is how art in its many forms can change a person’s outlook – art that is valued for how it makes one feel.

Evelyn’s story is told separately to that of Ulysses. She comes from wealth and has used her bohemian privilege to enjoy a lifestyle she has chosen for herself. In beautiful prose the author presents an understanding of artists through the ages. Evelyn’s coterie of the famous shines brightly but, for me, lacked the depth of the relocated cockneys. Evelyn’s life is one of ease through which she moves effortlessly, enchanting those encountered with her knowledge and repartee.

Although Ulysses and his friends have known hardship, they become beneficiaries of luck and coincidence. Some of this may appear farcical but is made acceptable through skilful rendition. I found this the more interesting storyline and it is rightly the focus of attention. Sections follow the group through the decades of the fifties, sixties and seventies as they build their lives on opportunities offered and worked with.

In 1966 a devastating flood destroyed lives, homes and businesses in Florence. The devastation caused is vividly depicted – a deeply moving account of loss and resilience. This is just one event in which the group of immigrants prove it is possible to live and be accepted abroad if willing to assimilate. Their experiences are in contrast to many visitors, those who seek out food familiar to them and complain of locals’ behaviour.

“The usual movement of English tourists, oblivious to life around them, looking for answers in their guidebooks.”

The tale being told is one that sparks many emotions with its richly mixed palette of joy, hope and humour, alongside grief and forbearance. The characters may benefit from financial good fortune but at the core of their being is the unconditional love and care they offer each other and those who befriend them.

Any Cop?: A story of generosity of spirit that truly enriches – a movingly memorable but ultimately joyous read.