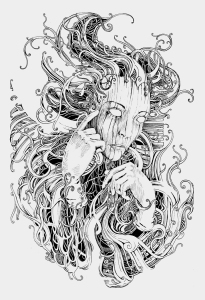 ‘What have you got to feel miserable about?’

‘No point in wallowing in self-pity, why can’t you just snap out of it?’

One of my good friends has been diagnosed with Parkinson’s disease. When she first told me this news she mentioned that her mother had the illness too. She was seeing first hand what her future may be if medical research does not advance. I mentioned genetics. It was absolutely the wrong thing to say. My friend has children and reacted with horror at the thought that this previously unknown flaw in her makeup could be passed on to them.

When I first started suffering from anxiety I wrote about it in my blog. One of my cousins responded that her mother, my mother’s sister, had also been anxious. It made me think about a possible genetic link. It caused me concern that I may pass on a propensity for this miserable malady to my children.

In my younger days I self harmed. Not often and never life threateningly but cutting myself provided relief from the very real pain that my dark thoughts triggered. I often considered suicide. I made one attempt with pills in my twenties but regretted it before I had swallowed enough to do damage. The body’s demand for survival is strong.

I did not speak of this to anyone. I felt ashamed. I believed that I would be regarded as an attention seeker. In my head I could hear the voices of the many who opined that those who truly wish to commit suicide succeed.

When my babies were born, three children in three and a half years, my life became too exhausting for me to think about much other than our day to day survival. I realised how alone I was. All around me other mothers appeared to be coping. I observed their social lives, the cakes they baked, the committees they sat on, the crafts they made. I felt a failure. I put on my outside face and tried hard not to complain. Always there would be someone worse off than me, those with money worries or a sick child. I took every implied criticism of my parenting choices personally, storing it all away to berate myself with later.

I still feel my stomach clench and nausea rise when I remember a situation where I said or did something that I subsequently construed as foolish. As a child, a teenager, throughout my adult life there are decades of foolishness that I struggle to set aside. I suffer palpitations, cold sweats, occasional panic attacks when asked to face certain, very ordinary, situations. There is no sense to any of this. Mountains made out of molehills still have to be climbed. Sometimes the energy to do so cannot be found.

I have never sought medical help. Although I have suicidal thoughts from time to time I would not do that to my children. No matter how utterly worthless I may feel at times I accept my duty as their mother.

My worry is that I have passed this on to them. What if my genetic legacy includes a switch that will one day cause my offspring to feel as I do? There is love in this house but will that be enough to ward off the worst effects of this imbalance?

There are those who are working hard to raise awareness of mental health issues and to challenge the stigma that it carries. So many have notions of justification and blame. They judge and find the mentally unwell guilty, although rarely as guilty as the sufferers find themselves.

I know that I am lucky. My issues are mild and generally manageable. I recognise my problems and many of their triggers. I avoid adverse situations where I can and have strategies for self help. It is only in my darkest moments that I feel overwhelmed.

My children’s genetic heritage includes a familial propensity for heart disease, stroke and various cancers. I feel no particular guilt for these as we must all die of something eventually. There are many in the family who have lived well into old age. I hope and pray that my children may be amongst this number.

I suspect that my fears for their mental health stem more from the issues surrounding quality of life. Parents wish to see their children happy. Anxiety and depression can kill, but for most sufferers it is the living that is the challenge. 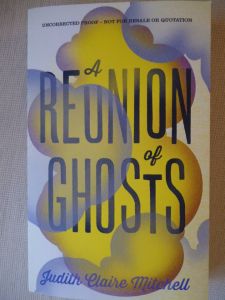 A Reunion of Ghosts, by Judith Claire Mitchell, is a novel of poignancy and dark humour. It tells the tale of three, middle aged, Jewish sisters living in New York at the turn of the century. It is written as their suicide note.

Throughout their lives these sisters have believed that they were condemned by a family curse. Their great grandfather, a Nobel prize winning chemist, was responsible for the development of a product used to kill thousands in times of war, a product so deadly that they believe it continues to poison the world today. Each generation of the family since has had members who have committed suicide, a legacy that the sisters intend to emulate. This book tells the story of four generations of their family. It is a history passed down to them and experienced by them; the repercussions have coloured their lives.

Despite the shadow of death that pervades the tale this is not a depressing story to read. Puns and perceptive observations add wit and wisdom. The voices given to the sisters is stereotypically Jewish despite their claims to have no interest in the faith.

The prose is full of insightful asides that caused me to pause periodically to digest. In their efforts to try to come to terms with themselves the sisters dissect every experience looking for coincidences, reasons, proof that the family curse exists. These thoughts and discussions offer the reader a window on not just the lives that the sisters lead but on life.

They are incredibly close, living together in the same sprawling apartment that their grandparents furnished with the family heirlooms brought to America when they fled Europe and Hitler. The sisters still organise the kitchen cupboards as their mother and grandmother did. Even in the mundane they seem unable to move on.

This is a fascinating story that weaves fact into fiction with aplomb. It takes historical figures and real events as a basis from which to create a mostly fictional family history. It explores the damage that can be caused when troubles are considered to be preordained and deserved, and when such thoughts are given credence by others.

I enjoy family sagas, and this one is deftly written. Perhaps it was the unfashionable idea that death is simply an inevitable part of life that appealed, that it is not to be feared and is available as a choice. What should not be ignored is the brutal impact such choices can have on the living.

The final chapters added another dimension to the tale and created a satisfying denouement. The pathos of these sisters’ lives was perhaps that they never tried to live in any other way.

My copy of this book was provided gratis by the publisher, Fourth Estate.