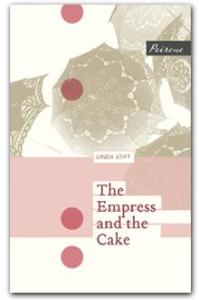 The Empress and the Cake, by Linda Stift (translated by Jamie Bolloch), is the third and final book in the 2016 Peirene series, Fairy Tale: End of Innocence. Earlier this year I read the second in this series, Her Father’s Daughter (you may read my review  here). These exquisite short works of fiction are the treasure discerning readers seek.

Set in Vienna, this latest tale centres around Frau Hohenembs, an elderly countess now living in a city apartment cluttered with objects from her past. She is cared for by a rotund housekeeper, Ida, who puts up with her mistress’s temper and quirks due to an oft repeated promise of a house in Corfu. The story is told from the point of view of a young women Frau Hohenembs meets at a local bakery. The countess offers a share of the cake she is buying and persuades the young woman to accompany her home, taking advantage of perceived weakness and a compliant nature.

Eating the cake triggers the young woman’s food addiction and she descends into a dangerous spiral of binge followed by purge. Meanwhile, Frau Hohenembs plans raids on city museums to reclaim items once owned by her icon, the Empress Elizabeth of Austria, referred to as Sissi.

Throughout the narrative are scattered anecdotes written by an unknown source who was close to the assassinated Empress, detailing episodes in her life. Sissi was obsessed with her looks, particularly her hair and weight. She observed a rigorous exercise regime and strictly controlled her diet. She would be sewn into her clothes and spend up to three hours a day having her exceptionally long hair styled and dressed.

Frau Hehenembs emulates this way of living, regularly berating Ida for lack of control in her consumption. When she notes that the young women, whose life she is now manipulating, has lost weight, she congratulates her even though the means by which this has occurred is evident.

The museum raids offer Frau Hehenembs a hold over her acolytes which she abuses dispassionately. When the young woman realises how she is being used she determines to escape.

There is a sinister undercurrent. The vagueness of the timeframe and the similarities between characters’ habits and foibles add shadows but also depth. The denouement is perfect.

The story is told with an elegant succinctness. The author understands that her readers will possess sufficient intelligence to read between the lines. The quality of the prose is a joy in itself, the spine tingling unfolding of the tale a pleasure to satisfy any literary palate.

There has been a trend recently for publishing big books. This offering proves that size is no indicator of value. I finished the story in a day but the pleasure lingers. You will feel no regrets indulging in this tale.

My copy of this book was provided gratis by the publisher, Peirene Press.