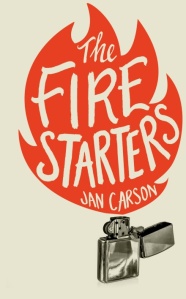 “This is a power worth believing in. I’m not at all sad for Ella Penney. I’m sad for her parents who do not understand what they’ve been given. Who may well miss the most glorious part of her.”

The Fire Starters, by Jan Carson, is a tale of two fathers struggling to gain control of events surrounding their offspring. Set in contemporary East Belfast during an unusually long, hot summer it perfectly captures the voice, quirks and insular concerns of the local community. There is a dash of magical realism that may be read as possibility or metaphor. It all adds depth to a tale of parental concerns for children, who insist on developing as individuals despite best efforts to mould them as approved.

Dr Jonathan Murray is a single parent caring for his newborn daughter, Sophie. Having been raised in the knowledge that his own parents had never planned to have a child, and then been left behind as a teenager when they emigrated to New Zealand, he has few pointers to good parenting other than practical knowledge gained from his profession.

Jonathan has little positive experience of any close relationship. The few friendships he formed whilst at university bore little resemblance to those depicted on American television. The time spent with Sophie’s mother has left him afraid of the power their child may unleash as she develops.

Forced to return to work in order to pay the bills, Jonathan hires a nanny. He takes what precautions he can to protect his child from outside influences but believes that, longer term, more drastic measures will be necessary to keep the rest of the world safe from Sophie.

Sammy Agnew has a violent and bloody past that he put behind him when he and his wife had their children. Two have now flown the nest but the eldest, Mark, still lives a nocturnal existence in the attic upstairs. When local politicians decide to limit the height of the loyalist community’s July bonfires – citing health and safety – there are calls for protest in the form of widespread arson attacks. Sammy fears that Mark may have inherited the anger he himself, at times, can barely suppress and become involved in events that could lead to tragedy.

Growing ever more despairing, Sammy seeks help from his doctor and thereby meets Jonathan. Dr Murray has also recently been consulted by the mother of a child born with wings but who cannot fly. Even in this small corner of the city he discovers there are numerous parents struggling to deal with children whose particular gifts, characteristics and behaviours cause them issues. They do not fit within what society is willing to accept. Despite this, Jonathan still regards Sophie as a special case. He advises Sammy to act for the wider good. The tension ratchets up as the reader realises how Jonathan plans to follow similar advice in dealing with Sophie.

The author has a knack for capturing the nuances of everyday conversation and activity. Jonathan’s interactions with the lady receptionists at his GP practice are a delight. His discomfort in any company is astutely portrayed. Sammy and his wife offer a picture of a long married couple who quietly coexist whilst longing for their past selves. Every character, major and minor, adds to the humour and pathos redolent of this still troubled city.

There have been a number of novels published recently offering windows into life in Belfast – the experience and legacy of The Troubles. Those that I have read focused on areas to the west of the city. The Fire Starters captures the idiosyncrasies of people living to the East – from the narrow inner city terraces to the more affluent Castlereagh Hills. The resentments and aspirations emanating from these streets are evoked with unstinting authenticity.

A delicious and layered tale written with a refreshing lightness that complements its originality and wit. Playful yet piercing, this was a joy to read.