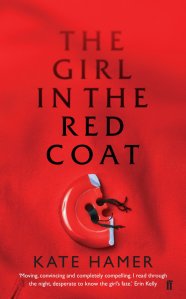 The Girl in the Red Coat, by Kate Hamer, tells the story of Beth and her daughter Carmel who is abducted when she is eight years old by an elderly man claiming he is her estranged grandfather. Beth is recently divorced from Carmel’s father, Paul, who left them for his girlfriend, Lucy. Where Beth is bohemian in dress and behaviour Lucy is chic and conventional. Sometimes Carmel would prefer if her mother were more ordinary. She resents that she feels constantly watched and constrained. Beth is doing her best but still suffers the aftershocks of the failure of her marriage. She seeks comfort from like-minded friends. She has not spoken to her parents in years.

Beth is naturally devastated when her daughter vanishes whilst on a rare day out together. The subsequent chapters told from Beth’s point of view cover the shock of loss, the need to keep searching, and then the painful coming to terms and finding a way to survive.

The chapters told from Carmel’s point of view are disturbing due to the situation in which she finds herself. Lies have been told to keep her from trying to return home. She is confused and unhappy but children have little control when the adults caring for them make decisions. She longs for love but can see no practical escape from the circumstances imposed.

Carmel has a gift which I felt was a weakness in the plot. Whilst I accept that there are happenings in the world than cannot yet be rationally explained this was a struggle to go along with. The attempts to monetise what she could do were plausible, but by making her abilities apparently real my engagement with the tale was weakened.

The writing is polished and I wanted to know the outcome so read on. I found the denouement something of an anti-climax. It was not that it was difficult to believe events could be concluded in this way but rather that it felt abrupt. I was looking for more nuance and depth.

I know that many other readers have adored this book so perhaps my expectations were too high. It is not one that I can recommend.