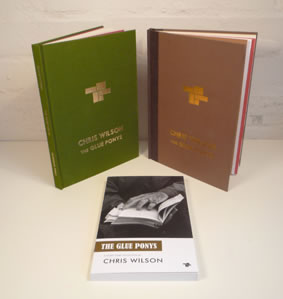 “one way or another, they all been robbed of something precious, and the crazy thing is, most of them don’t even know”

The Glue Ponys, by Chris Wilson, is a collection of short stories featuring characters that most know exist but whose well-being is rarely considered, even by themselves. They are the drug users, the pimps and prostitutes, the convicts and degenerates who live within the cracks of modern society. These people are also human beings, even if they do eschew the lifestyle to which most others aspire. Not for them low paid work and a struggle to rent a decent place in which to live. They have discovered heroin, and do whatever it takes to chemically get by.

The author lived on the streets, used drugs and has done time in prison in the USA. Knowing this adds an authenticity to the tales he weaves. The narrative is crude and direct; the tone matter of fact, almost unsympathetic; yet the pictures conjured by his words are darkly poetic. There is little of beauty in these lives. The rawness evoked is viscerally felt.

The characters in each story have chosen to live their lives this way, although perhaps because they can foresee no acceptable alternative. They watch as their peers die young, of overdose or user related illness. Death is a fact of life to which they appear numbed.

Yet each of them once had a childhood. These backgrounds are too often filled with years of abuse from which they escaped. They have achieved a kind of self destructive control. They risk jail, but know what it takes to get by. They live each day from one hit to the next.

There are thirty-one stories in the collection, most only a few pages long. The vignettes are set around freeways, in shelters, broken cars, cheap motels and on the downtown streets of San Francisco. Sex is a commodity, drugs a way of life. They form bonds and help each other out, then walk away with whatever they can take for themselves.

The first tale, ‘The Lieutenant’, tells of two thirty year old children, the last survivors of a band of misfits drawn from the four corners of the globe to care for a Vietnam veteran in order to share the drugs bought with his VA checks and social security payments. When the veteran dies these two put the body in a cupboard, wrapping it up in plastic bags and duct tape. They then continue to cash his cheques and inject.

The final tale, ‘The Mummy’, tells of a heroin user who breaks into a house to pilfer goods to sell. He comes across a body, muses over the man’s life and why nobody has noticed his death:

“you’ve probably been here about a week and not a soul has seemed to miss you. In fact, you could be me, I realised. Yes, we have something in common, but I earned my fate. I wonder what you did to be of no consequence or meaning to anybody else in the world.”

In between are stories of those who make money from supposedly respectable, tax paying citizens who cruise the streets looking to buy their own drugs and sex. When the providers have learned young that their bodies can be taken by others, it is more understandable why they choose to use them to profit themselves.

These tales provide thought provoking, challenging reading. Few wish to tackle the causes of the problem lives explored, much easier to berate those who end up this way. The Glue Ponys offers the opportunity to better understand. The writing is succinct, vivid, with an articulacy that demands consideration. It is a powerful reminder: we too are here.

My copy of this book was provided gratis by the publisher, Tangerine Press.