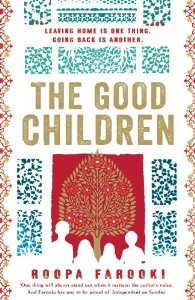 The Good Children, by Roopa Farooki, is a tale of four Punjabi siblings and their attempts to carve out lives for themselves in the wake of an abusive childhood. Physically and mentally manipulated by their beautiful, wily mother throughout their formative years, they were required to follow the paths chosen for them: the boys to become doctors and the girls to become trophy wives. All were expected to live to bring honour to their parents, to be good.

The book is set in Pakistan, England and America; the different cultures and expectations of those around adding weight to the inner battles that each of the siblings must fight throughout their lives. All recognised the damage that their upbringing had inflicted, yet despite their best efforts none could entirely overcome what had gone before.

The author has done a fabulous job in drawing the reader into the world that she has created. The differences in expectation of a traditional family living in Lahore may seem shocking to a Western reader, but it is presented in an understated yet powerful way. It becomes real and believable, the reasons for the traditions understood if not agreed with. All can empathise with the guilt that a grown up child can feel when they have negative feelings of any kind towards a parent.

The time period covered, from 1938 to 2009, gives ample opportunity to explore each of the characters lives. Chapters are written in the voice of each sibling, allowing the reader to consider thoughts and perceptions from alternative perspectives. The book has depth and clarity, is challenging but never off putting despite the many difficult topics broached: rape and domestic violence; racism, sexism and homophobia; cultural clashes and the effects on children of parental choices.

I particularly liked the comparative scenes, such as when the daughter raised in Pakistan, who expected servants to see to her every whim, irritated her all American cousin when his parents pandered to her whims. I also enjoyed the way the author used clothes on many occasions to illustrate character development, such as when the sisters wore traditional costumes which spoke of wealth and privilege in Pakistan yet looked garish in the West, or when the children mixed and matched western and traditional garb to create their own styles.

The book is beautifully written, enabling the reader to enter a world that can so often be portrayed as primitive or barbaric, and gain an understanding as to why it may be perpetuated by some. It is not a difficult read, but should not be rushed. Each member of the cast is worth getting to know, each can tell the reader something of the impact of an individuals actions on others.

I value a book that teaches me empathy and understanding of different cultures and lifestyles, and The Good Children does so in spades. It is never moralistic or judgemental, but tells an intricate tale of love and loss across cultural, sexual and generational boundaries. It is so much more than just a family saga, it is a story of survival, of life, and the price that must be paid for living with ones self.