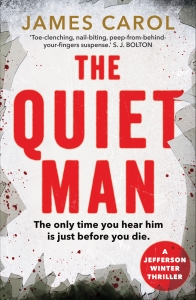 The Quiet Man, by James Carol, is the latest thriller in the author’s Jefferson Winter series and the first of his books that I have read. The protagonist is a former FBI profiler, now travelling the world as a freelance consultant assisting in hunting down serial criminals. Winter’s backstory as the son of a killer and possessing an unusually high IQ makes him an interesting creation. In this story, set in Vancouver, he teams up with Laura Anderton, a former detective turned private investigator.

Anderton headed up the police team tasked with investigating a series of murders in her city, carried out annually on 5th August. Each of the three victims to date was gagged, strapped to a chair, and left alone wearing a bomb which, when triggered, tears them apart. The method of triggering is this killer’s modus operandi yet conflicts with serial killers’ understood ways of working.

With 5th August approaching once again, Anderton has requested Winter’s help in the hope that they can prevent another death. Having been forced out of the police by a negative media campaign she is eager to solve this case for herself.

Anderton and Winter are being payrolled by Nicholas Sobek, a wealthy and controlling businessman whose beautiful young wife was the killer’s first victim. Initially Sobek was a suspect but the subsequent murders made this difficult to prove. He is intense and determined, his aim being to punish the man who took what was his.

The writing is engaging with many twists and turns offering the reader chances to guess at motive and connections. Winter is not afraid to take risks that the police could not countenance for fear of compromising their ability to present evidence necessary to secure a conviction. This is not so much a high action thriller as a deadly game played by cold cunning and methodical intelligence. There is little emotion in the narrative and this strengthens the intrigue.

The varied cast of characters adds interest with interactions affected by attraction and repulsion yet remaining professional. I was impressed that the author felt no need to inject romance, common in crime fiction yet often unnecessary for plot progression.

I enjoyed this book and would now like to read previous instalments in the series. It is a compelling and entertaining read.

My copy of this book was provided gratis by the publisher, Faber and Faber.

This post is a stop on the Quiet Man Blog Tour. Do check out the other blogs taking part, detailed below.