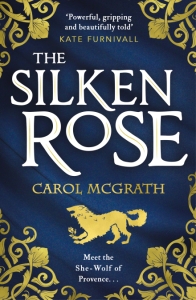 Hilary Mantel raised the bar for historical fiction when she wrote Wolf Hall. For readers who do not get on with her style of prose there are respected writers such as Alison Weir telling immersive stories of monarchy from times of old. And there are many other fine authors – it is a popular genre. The intrigues and extravagances of courtly life, along with the challenges faced by those living beyond palace walls, offer a window into times it would otherwise be hard to imagine given contemporary culture.

The Silken Rose, by Carol McGrath, focuses on Ailenor of Provence. In 1236, aged just thirteen years of age, she travelled to England where she married King Henry III. In this tale they fall in love and she gains power through her carefully managed influence on her husband and several of his courtiers. She is described as a beauty and produces healthy children. Henry is often fickle but she mostly handles his tempers. The English aristocracy of the time resent the royal couple’s nepotism. Perceived changes of allegiance can prove dangerous.

The portrayal of these medieval monarchs is one of vanity and entitlement. Both King and Queen believe they hold office by the will of God. They resent any argument or interference from powerful and rich lords, yet require these men’s monetary support to maintain their lifestyle and settle disputes. The church is also a factor as favours need to be bought.

All of this, along with the day to day habits of those living within and serving the royal household as it moves from palace to palace throughout the land and abroad is well portrayed in the story. There are nuggets of interest in the accepted customs. And yet the telling came across as a roll call of significant events populated by two dimensional characters. Ailenor, as the central figure, evoked little emotion. It is mentioned in places that she cried or was happy but her actions rarely reflect feeling other than a desire to keep Henry on side.

A merchants daughter, Rosalind, gains favour from the Queen for her exquisite embroidery. This friendship, and its repercussions, seemed far removed from other portrayals of ruthless, historic rulers.

The Silken Rose offers harmony with only brief mentions of potentially unhappy marriages or fickle friendship. At a time when positions were brokered for power or money, when marriages were forged to produce heirs and alliances, I struggled to believe there would be so much lasting loyalty over decades of lived experience and resulting change. When characters face difficulties, reasoning is skimmed over in the prose.

Dialogue provides exposition but offers little depth. Much is mentioned but little explored.

For readers looking for a nice story with added historical interest this may well be enjoyed. I found it bland and should probably have stopped reading when it became obvious the writing style wasn’t for me.

My copy of this book was provided gratis by the publisher, Headline Accent.