Yesterday I had a delightfully bookish day attending not one but two literary events where I got to meet some of the authors I have featured on my blog.

For the first of these I returned to a town I worked in some twenty years ago. Swindon does not appear to have changed markedly in that time, but it has acquired a fabulous new library. 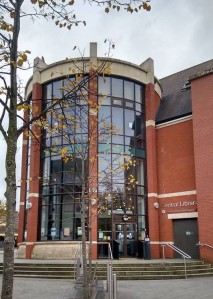 As part of an initiative run by Literature Works (the literature development charity for South West England and Arts Council National Portfolio Organisation) called Reading Passport (a partnership between South West Regional Library Service, Literature Works, the Royal Literary Fund, and supported by Read South West) the library had organised an author talk by one time local girl, Sarah Jasmon, whose debut novel, ‘The Summer of Secrets’, was published earlier this year. I overheard one of the organisers commenting that the talk was one of the best attended in the series.

When I arrived Sarah was working her way around the room chatting to the various groups of attendees. It was lovely to see an author being so open and friendly, and it set the tone for what was to be a captivating hour.

After the introductions Sarah gave a reading from her book before going on to tell the audience about her journey from aspiring to published author. 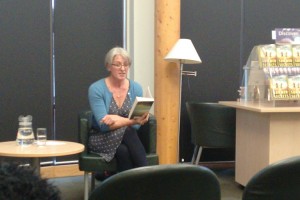 Although she had been tinkering with writing for many years, it wasn’t until she enrolled in a Creative Writing MA, just before her fortieth birthday, that she succeeded in completing a novel. Sarah talked of the advice she was given on the course, that beautiful prose is all very well but a plot requires that things happen along the way. She talked of the complexity of her initial draft and how this was simplified during rewrites, how she found her voice and ended up in the genre of contemporary fiction.

Sarah admits to a degree of luck in finding both an editor and an agent while her novel was still in early format. Listening to her story it is clear that she also put in the groundwork herself, not just with writing a good book but in being willing to pitch it to the publishing industry whenever she had the opportunity.

From the questions being asked it appeared that there were many writers in the room keen to learn from Sarah’s experiences. They listened attentively as she spoke of the importance of networking, social media, perfecting what she called an elevator pitch, the submissions process, working with both editor and publisher, and an author’s input into the packaging of the finished work. It would seem that writing a book is only the beginning, that to become a published author also requires what sounded very much like standard business skills.

One comment in particular stayed with me. Sarah talked of always thinking the next milestone was the one that would get her to where she wanted to be: finishing her novel; finding an agent; signing a book deal; seeing her book published; meeting a sales target. Sometimes, she said, it is necessary to just enjoy where she is.

After the event a good number of books were sold, Sarah taking the time to sign each one and to chat to her eager readers. I introduced myself and felt chuffed when she knew who I was. It was lovely to meet such a friendly and personable author, and she made me feel truly welcome. 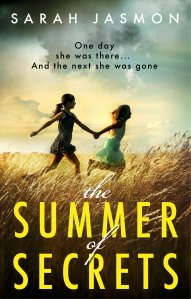 Published earlier this month by Black Swan (a Transworld imprint), ‘The Summer of Secrets’ is author Sarah Jasmon’s debut. I was fortunate enough to be sent a copy by the Curtis Brown Book Group (you may read my review by clicking here) and was then invited to discuss the book at an on line meetup. Sarah took the time to answer a lot of questions!

As I said in my review, I do not quite understand why Helen’s life was impacted to such a degree by the events revealed. I am therefore delighted that, in this guest post, Sarah focuses on the relationships between her characters. Do you remember the summer you were sixteen? I know I do.

The Summer of Secrets is mostly about friendship, about the intensity of those early proto-love affairs, when you find a soulmate who, for a season, becomes your constant companion. Think of films like Me Without You, or almost any story about high school. (In trying to narrow the choice down, I came across this excellent article by Rowan Pelling: The darker side of female friendship – Telegraph.) Such friendships tend to fizzle out in the end, with one or both participants moving on to different relationships and wider interests. In film and fiction, and occasionally in real life, they move into darker territory.

Helen and Victoria are not equal partners in their friendship. Helen has been unhappy at school, and is facing a summer with little interaction outside of her home environment. She is wary of Victoria even as she is dazzled by her, constantly on the lookout for snubs and dismissal. The younger sibling, Pippa, is safe in comparison, an uncomplicated child with a sweet nature. Victoria is tough, world-weary and single-minded. She is happy to take up with Helen whilst no-one else is available, but she’s not a friend to rely upon. She is exciting, though, her plans always hovering on the outer edge of acceptable.

It’s this imbalance that stops the friendship from becoming dangerously intense. Victoria is careless and occasionally cruel, but not malicious. Someone asked me the other day if I thought that, had the summer not ended in the way it did, would Victoria and Helen stayed in touch? And I think they wouldn’t. Victoria would have left, shedding Helen without much regret. Helen would have taken time to recover, but would have ended up a stronger person, with wider horizons. Except that fiction is never that straightforward.

The book is also about absent parents, and the effect that can have on events. I’ve always liked how children’s fiction allows for total freedom. The Famous Five are forever left to their own devices whilst parents go abroad, or find themselves too busy with important work to take any notice of what the children are doing. Arthur Ransome makes sure that the Swallows and the Amazons are without supervision, Just William goes out in the morning and evades the adults with chaotic consequences. I wanted to capture some of this release.

In any other summer of her life, Helen would have been unable to follow Victoria in the way she does. Her mother’s absence and her father’s self-absorbed depression are not her normal experience, unlike the Dover family with their long-lost father and the fragile mother who is always at least one remove from reality. But at the end of the summer, when everything has fallen apart, it’s Helen who is left with no emotional safety net. Her mother, having been absent, is now permanently excluded from her confidence. There is no return to normal, no resolution.

Another question that’s often asked is how can Helen have forgotten what happened so completely? I’m not going to answer that: being vague is the author’s prerogative after all! What I will say is that I think trauma and a guilty sense of half-recognised responsibility, coupled with shock and sudden change in circumstance, can lead to suppression. Helen has no-one to talk to, no fresh air or perspective to make the unthinkable into a manageable thought. She turns in on herself instead, and packs everything away. When we meet her as an adult, the person she was that summer is encased in a hard shell and hidden deep inside.

Meeting Victoria again forces her to chip away at that protected centre. I know what I think happens afterwards, but you’ll have to decide for yourself. Let me know.

This post is the final stop on The Summer of Secrets Blog Tour. Do check out the other posts, detailed below.

If you would like to know more about this author, her website may be found here: Sarah Jasmon – All the best writers live on boats.

The Summer of Secrets, by Sarah Jasmon, is simmering, evocative and charged with an undercurrent of apprehension. The author perfectly captures the concerns of the teenage protagonist, Helen, as she struggles to deal with her parents’ separation and rejection by her peers. When the bohemian Dover family appear on Helen’s doorstep it is no surprise that she is drawn to them. Their friendship will prove devastating for both families.

Helen is sixteen years old and is looking forward to a summer of peace and freedom. Home life has been chaotic since her mother left, her father seeking solace in drink. Helen welcomes the cessation of their bitter rows, and the relaxation of her mother’s strictly imposed orderliness. She is angry and lonely but also relieved.

Lying on the grass in her garden by the canal Helen wonders how she will fill the balmy days ahead. Her question is answered when a young girl unexpectedly appears in her hedge. Thus she meets the Dovers, who she discovers have recently moved into a nearby cottage, and is drawn to their enigmatic lives.

Victoria Dover is of a similar age to Helen and they soon become friends. They are not, however, equals. Victoria relishes her dominance, forever pushing at Helen’s trained reticence. As the summer progresses Helen ingratiates herself with the whole family before Victoria starts to push her away.

The author intersperses the story of the summer of 1983 with a narrative set thirty years later. Forty-six year old Helen spots a poster on the wall of new art gallery advertising an exhibition of photographs by award winning Victoria Dover. We learn that she has neither seen nor heard from any of the Dover family since that fateful summer, a summer that has scarred her life.

Helen’s life pivots on a night near the end of the summer, which she can barely remember. As the tension builds the reader knows that some tragedy is about to unfold. The denouement does not disappoint.

The byline on the cover of this book reads ‘One day she was there… And the next she was gone’. I did not feel that this represented what the story was about. It is a coming of age tale; it was not just Victoria that Helen lost.

It was good to be reminded that in 1983 there could be ramshackle cottages by an overgrown and neglected canal, before developers saw potential and tidied nature away. Likewise children could run free, time unfilled by planned activities not viewed as wasted. It is redolent of a time that is gone.