The final event I attended at the Marlborough Literature Festival was a discussion between two debut authors, both of whom were named by The Observer as new faces of fiction for 2017. I had purchased my ticket as I wished to meet Xan Brooks. I have been recommending his book – The Clocks In This House All Tell Different Times – to everyone since I read it (you may click on the title to read my review). Also taking part was Mahsuda Snaith, author of The Things We Thought We Knew. The discussion was chaired by Caroline Sanderson, an editor at The Bookseller magazine.

Following introductions, Mahsuda read from the beginning of her book before talking us through how it came to be written. She told us that she wrote the novel when she was sixteen and then set it aside. When she went back to it, years later, she saw the bare bones of a story she could develop so set about a rewrite. As a primary school teacher she observes the worlds children inhabit, something that enables her to capture their authentic voice. Both authors have young girls as their protagonists, albeit living in different times. These are coming of age stories with a difference.

In her first draft Mahsuda’s girl, Ravine, was in a coma. In the rewrite she is bedridden with chronic pain and has been for several years. With a static protagonist the mother figure, Amma, is key to moving the plot along. All the characters in the book arrived in Mahsuda’s head fully formed, more of them than could ultimately be included. The second person point of view was added by the editor.

Mahsuda wished to tell a positive council estate story. Elements were drawn from personal experience – she wished to portray the sense of community in this setting. Like her characters, Mahsuda is a British Bangladeshi but ethnicity is not the key driver. Other writers have been told by publishers that their stories are not Asian or African enough, as if a girl in a headscarf can only write in a certain way.

Mahsuda’s influences are from particular books rather than authors – The Color Purple, One Flew Over The Cuckoos Nest, The Life of Pi.

Xan then read from his book. Describing it as fairytale grotesque he explained that the kernal of the idea came from his family. A great aunt had spoken, just before her death, of being sent into woods as a child to meet funny men. In talking about this, perhaps for the first time, she appeared traumatised. Xan mentioned that, for it to happen, her parents must have been complicit. 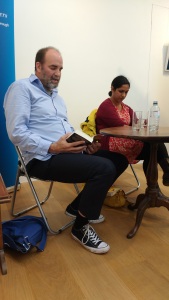 First conceived as a short story, it tells of an innocent child going into the deep, dark forest where the monsters live. When developed in longer form Xan realised it required light and shade as readers would not wish to read four hundred pages of bleakness. Setting it in 1923 allowed the portrayal of damaged war veterans who had fought for an ideal of a country that no longer existed. Xan wished to explore the contrasts between these men’s changed circumstances, the faltering economy, and the decadence of the wealthy at the time of Gatsby. It was a decade of paradox.

Xan admitted that he did not do much research. He talked of the lack of vocabulary at the time, how it was yet to catch up. There was no definition of PTSD or child abuse, people were expected to bear whatever happened to them. Children were regarded as just a small step up from livestock, sent out to work, expected to help support the family. So many had died in the terrible war – if something did not kill they were expected not to complain.

The story is about abuse at all levels of society: war as industrialised abuse; the wealthy and their treatment of those they regard as lesser beings; poverty and whatever it takes to stay alive. The structure sees the girl get through the forest, beyond the monsters, to reach the castle beyond. Here she discovers that life is worse. The wealthy created the monsters, directly and indirectly. Xan mused about who owns the future – aristocrats, soldiers, the children who survive what adults put them through.

In trying to keep the story honest yet portray the grotesque Xan worried it would descend into kitsch. He was asked if, as a Guardian film editor, he envisaged the story on screen. Xan assured us he wished to move away from this idea. He recognises the implied relationship between writing styles but suggested it was like saying a banjo player would be capable of playing a cello without further training.

Asked about titles, Xan’s came from his wife, a random comment she made as he was writing. There was resistance to it but, unable to come up with anything better, and being memorable, it remained. Mahsuda had a working title of The Constellation of Ravines, which would have fitted with her proposed chapter headings. When this was met with resistance she accepted her publisher’s suggestion.

There followed some discussion on reviews. Mahsuda admitted to checking Amazon frequently and was pleased her early reviews were mainly positive. By the time negative feedback appeared she had won awards so had acquired more confidence in her abilities. Although validation matters she accepts that no book will appeal to everyone.

Having been a critic, Xan now experiences reviews from the other side side of the fence which he told us has changed his opinion of bloggers, regarded with a degree of snobbishness by paid reviewers. Xan stated that bloggers work can be at least as well written as that published in national newspapers. Naturally I felt cheered by this.

The authors were asked if they had done a creative writing course. Mahsuda told us she couldn’t have afforded an MA but read up a lot on creative writing. Xan completed a module as part of his degree twenty years ago and subsequently ran creative writing sessions for arty people in London, at a centre where David Bowie used to hang out.

There was further discussion about language, semiotics, and societal expectations. Xan reminded us that in the 1980s Benny Hill chasing women around was considered funny. Mahsuda pointed out that, with hidden illness, providing a medical term helps sufferers shake off the accusation of shirker. In twenty years time what parlance will exist, what will we look back on and consider appalling?

To round the discussion off the authors were asked what comes next. Mahsuda has a two book deal and has already completed her next novel, written while this one was being sent out and then prepared for publication. Xan is still working on ideas.

The talk offered a fascinating insight into the early stages of a literary career. I was particularly happy with the inscription Xan provided in my copy of his book. 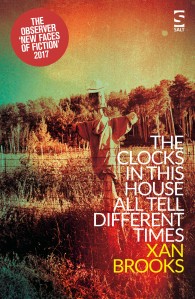 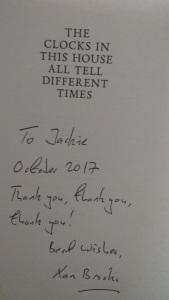 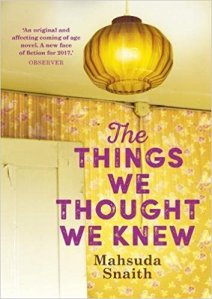 I came away from the festival buzzing with delight at the people I had met – authors, publicists and those who work to promote books in other ways. I will be connecting via social media and hope to be in touch with some of them again. It was a fine way to spend a weekend.

The Clocks In This House All Tell Different Times is published by Salt.

The Things We Tought We Knew is published by Doubleday.

You may read my thoughts on other events I attended at the festival by clicking on these authors’ name: Gwendoline Riley; John Boyne.

The Marlborough Literature Festival will return next year. Save the Date.