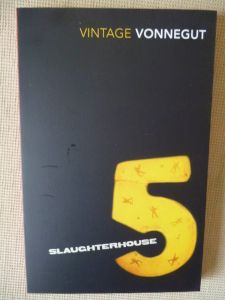 Slaughterhouse 5, by Kurt Vonnegut, is a story about memory, time travel and the futility of war. The author was a prisoner of war in Dresden when it was fire bombed by the allied forces in 1945 killing 135,000 people and devastating the city. This experience is pivotal to the story. As its narrator he opines that, like Lot’s wife, we are not supposed to look back lest we be lost. His protagonist, Billy Pilgrim, has come unstuck in time, travelling backwards and forwards through his life. What is recollection, memory, thought, if not a type of time travel?

‘We went to the New York World’s Fair, saw what the past had been like, […] saw what the future would be like, […]. And I asked myself about the present: how wide it was, how deep it was, how much was mine to keep.’

Billy Pilgrim considers time to be like space. In his view death is simply another moment, a feature on the path of a life. People will continue to exist if remembered.

‘We will all live forever no matter how dead we may sometimes seem to be.’

The tale told is a collection of memories, a non linear life story. In many ways Billy would be considered ordinary: a son, husband, father, successful optometrist. In other ways he was extraordinary: prisoner of war, plane crash survivor, time traveller, alien abductee.

When he starts to share some of his more bizarre memories his daughter remonstrates with him, fearing that he is losing his mind. He asks, what is normal? Bookstores are filled with books about sex and murder; the news is of sport and death; people pay to look at pictures of others, like themselves but with no clothes on; they get excited about the price of things that do not exist called stocks and bonds. These things are accepted yet when someone tries to talk of what is not understood it is not believed, it is assumed that it cannot have happened.

At one point in the book Billy is watching a war film backwards.

‘American planes, full of holes and wounded men and corpses took off […]. Over France a few German fighter planes […] sucked bullets and shell fragments from some of the planes and crewmen. […] a German city was in flames. The bombers opened their bomb bay doors, exerted a miraculous magnetism which shrunk the fires, gathered them into cylindrical steel containers, and lifted the containers into the bellies of the planes. […] everything and everybody as good as new. […] factories were operating night and day dismantling the cylinders […] so they would never hurt anybody ever again.’

War is accepted yet it kills and destroys.

The observations on attitudes are razor sharp. The story resounds with wit and wisdom as it challenges normality. Billy may have conflated fact and fiction at times but who is to judge what is real in anyone else’s life?

I loved this book. I fear that my review cannot do justice to the impact of the writing. I want to quote so much; better that you just go and read it for yourself. 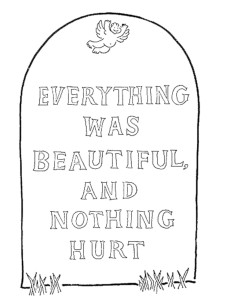 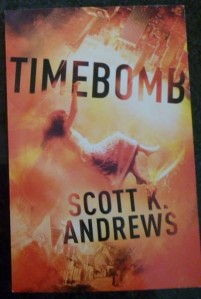 Timebomb, by Scott K. Andrews, is the first book in a planned, new, time travel trilogy for young adults. It follows the adventures of three teenagers plucked unexpectedly from lives that seem ordinary in the 17th, 21st and 22nd centuries to face a foe they are told little about. They are flung into an unknown world where they are constantly threatened and do not know who to trust. As may be expected if time travel became a possibility there are those who wish to control the few who can master it and thereby use it for their own nefarious means. In this first book in the series it is unclear who the enemy they must face is or what they want, only that the three teenagers are seen as instrumental in a deadly game that is being played out across many centuries.

Keeping track of the various timelines can be confusing in places as the travellers meet their future selves when they step in to perform rescues from life threatening situations. These glimpses suggest adventures to come with an increase in knowledge and skills. In this book however they are still learning and each of the protagonists folds under pressure at various times. Despite their unusual abilities they are not presented as superheroes.

I enjoyed the descriptions of present day advances as seen through the eyes of a traveller from the past. What was made less clear were the limitations of technologies that could be carried back in time. Toasters and fridges it seems were transportable but not the helpful computer chip that future person carried in her head and which her enemies wished to acquire. I wondered why all those capable of time travel did not possess the best the future could offer.

The plot lines are complex but move along at a rollicking pace making this book a compelling read. It offers but one adventure and the reader is left with many questions and a desire to have them answered. With two more books planned this bodes well for the author, although I would have liked to have seen a little more coherence here. Throughout the excitement it was hard to grasp reasons for much of what was going on.

Having said that I enjoyed the book and will look out for the next instalment. Many of the characters are intriguing with several who played bit parts in this book perhaps being set up for future roles. This is an unfolding story filled with action and conspiracy that presents time travel as an ability that the world is probably better off without.

My copy of this book was provided gratis by the publisher, Hodder and Stoughton.