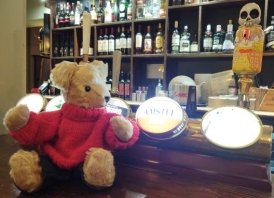 Those of you who follow the adventures of my intrepid teddy bear, Edward, will be aware that he enjoys the occasional pudding. This past month has therefore been a good one for him. It has included: a birthday celebration lasting an entire weekend, a few days away on the Devon coast, and Valentines Day. Although he understands why some eschew the latter event, Edward’s heart holds enough love for everyone and he has enjoyed the sweet treats made available to mark each of these various occasions.

The birthday bearer opted to eat out at a local pub to mark her special day. Naturally, Edward was invited to join the attendees. He was somewhat concerned when the kind waitress delivered the order placed, and then relieved when his food finally arrived at the table. 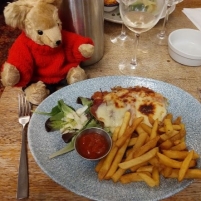 The next day was the actual birthday so a cake was made. Edward sampled the first slice and declared it delicious. He wondered if it contained carrot because the newly aged bearer is a vegetarian. 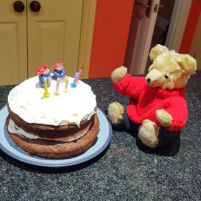 With the weather set fair for the time of year it was decided that a trip away was in order. It is quite some time since Edward visited Devon so this is where he was taken. He stayed in a rather nice hotel that understood the need for stocking the room and its fridge with welcoming treats.

Edward enjoyed drinks by the fire and a selection of sweets with coffee each evening. 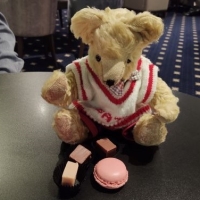 Days were spent exploring the blustery coastline. As well as walks, Edward took a bus ride and found a shop selling tasty ice-cream cones. On his return to the hotel he was pleased to find his biscuit supply replenished. 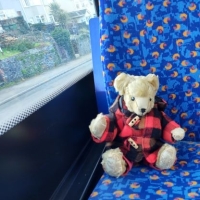 Dinner at the hotel was quite a quirky experience. Live piano music was played on a baby grand that turned out to be electric. Singers were accompanied by a recorded soundtrack with volume intruding on conversation. The food was, however, much to Edward’s liking, although the menu remained sadly unchanged throughout his stay. He also regretted not packing more changes of clothing as he always prefers to feel suitably dressed – and dapper – for every occasion. 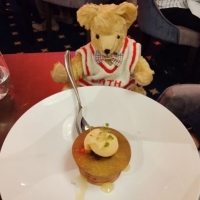 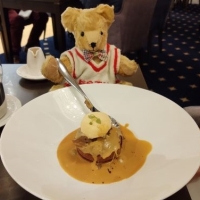 On the final day Edward came across some welcome signs of spring. It may still be regularly cold and a tad damp but the promise of better weather is cheering.

As mentioned earlier, Edward likes to mark Valentine’s Day. He made a banoffee pie for his bearers, and they made a coffee and walnut cake for him. 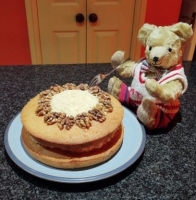 Edward hopes that all his readers have a bear to hug, and that they enjoy the unconditional love offered by a teddy.

He and Elizabeth were recently spotted planning another party for later in the year. And Edward is already making plans for his next exciting adventure… 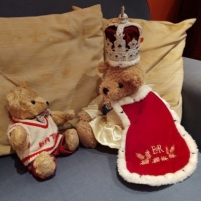